Brooke is learning the art of stalling before bedtime.

The bedtime routine begins smoothly enough as Brooke drinks some milk while I read her books.Â  When she’s done with her milk, Brooke runs to her room to find Bear and Monkey.Â  These are two stuffed animals (of a bear and a monkey, wouldn’t you know) that Brooke insists on sleeping with.Â  Brooke holds Bear and Monkey while I pick up all three to put them in her crib.Â  Brooke sees where she’s headed and immediately throws Bear and Monkey down so that I have to put her down so she can retrieve them.Â  At first I thought this was happening accidentally.Â  However, after several days of “accidentally” dropping Bear and Monkey, I started to wise up.

Now it’s at the point where she brings me Bear and Monkey and I immediately throw them into the crib right then and there.Â  Ha! Point for Mom.

Next it was the pacifier.Â  I would give Brooke her pacifier and lift her into bed.Â  Since she no longer had Bear or Monkey to throw, she started chucking her pacifier.Â  Rascal.

Now I don’t give her her pacifier until she’s in her bed already.Â  Ha!Â  Another point for Mom.

But before Brooke gets in her crib, I point to the picture of Jesus above her bed.Â  She in turn points to the ceiling where the smoke detector is.Â  She’s fascinated with that.Â  Maybe it’s just another stall tactic.Â  Hmm.Â  I guess Brooke gets a point there.

Finally, I lay Brooke down.Â  She cuddles Monkey in one arm and Bear in the other.Â  I go to put her pacifier in her mouth, but at this point every night Brooke realizes she has so much to say.Â  Thus begins her babbling.Â  She talks and talks and talks.Â  I can’t bear to put the pacifier in her mouth because her babbling is so dang cute.Â  So I listen.Â  And talk back.Â  And listen some more.

And before I know it, I realize I’ve just gotten sucked into another stall tactic.

In the end, I finally leave Brooke to finish the conversation in her own due time.Â  As I leave, I turn around and see this: 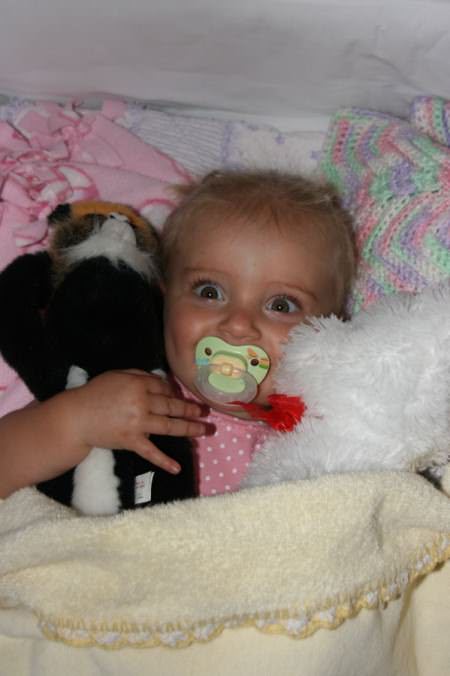 And I realize I never want anything about this routine to change.

Picture of the Week A Little Light Reading