We are having a little problem over here.  No, not the fruit fly problem.  I’m crossing my fingers that that issue is nearly behind us though our latest problem rhymes with fruit fly:  Dallas’s eye.

Dallas is having an issue with his eye(s).  Randomly throughout the day his eye will swell, turn blood red, and get really itchy, especially his caruncle.  (Don’t know what a caruncle is?  It’s that little red ball on the inside of your eye.)

Then, to make matters worse, occasionally his sclera will also get puffy and watery.  (Don’t know what a sclera is?  It’s the white part of your eye.  Look at us!  We’re learning so much!)

He’s also started swelling all around his nose and cheek and under his eye.

I can’t remember when this first started.  Maybe about two months ago.  Dallas’s eyes seemed to flare up in the morning and in the afternoon.  I had switched fabric softeners, so I stopped using the new softener thinking he was having an allergic reaction to it.

We thought things were getting better, but now he’s still having flare-ups and I think they may be getting worse.  He’s tried taking Claritin thinking perhaps he was experiencing allergies.  He’s tried taking Benedryl also in case it was an allergic reaction.  It doesn’t seem like either medication did anything.

He went to a general doctor yesterday, but of course, his eye wasn’t cooperating for the doctor…or should I say it was cooperating?  In any case, his eye was fine at the time so the doctor couldn’t see what was going on.  She prescribed an antibiotic in case he has an infection.

Of course, when he came home from the doctor, his eye went back to its old antics and we decided to make a video to memorialize the grossness.  Grab some popcorn!  Pull up a chair!  Click on the link and see a bit of what I’m talking about.  Then please come back here and comment if you have any idea what could be going on.

While getting into bed after feeding Spencer, the following exchange took place:

Dallas:  “Which dough comes next?”

Dallas:  “Which batch of dough is next?”

Dallas (offended that I would question his state of alertness):  “Yes I’m awake!”

Me:  “Why are you talking about dough?”

Dallas (mumbling):  “Maybe I’m not awake after all.”

This morning I was thinking about the candy window we did back in 2004.Â  I was looking at the pictures and I thought I would share them with you since we didn’t have the blog back in 2004.

ZCMI in Salt Lake used to have window displays during Christmas that were made entirely out of candy.Â  When ZCMI discontinued it Provo City took over and had the candy windows in the windows of businesses in downtown Provo.Â  We participated for a couple of years.Â  This was our entry.Â  It was a lot of work.Â  You might notice the picture of me and Rebecca on the fireplace and on the bookshelf.

Every surface that you see had to be made from something edible.Â  The pictures of us were coated with sugar.Â  The walls were frosting and gum sticks.Â  The floor was dyed coconut.Â  The fireplace was rock candy.Â  The bookshelf was rolled out Tootsie Rolls.Â  The door was pretzels.Â  The tree was sour straws.Â  The man was mostly fondant.Â  The popcorn strand was nerds so we had to buy a large quantity of nerds to sort out the white ones.Â  You can imagine where many of the rest went.

I can’t remember what award we won for the window but it was featured on TV and on promotional posters.Â  The theme for this year was “O Christmas Tree.”Â  We called our window “O Blasted Christmas Tree.”

Maybe tomorrow I’ll do a post about other candy windows. 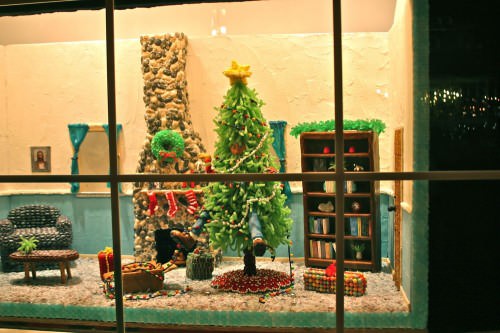 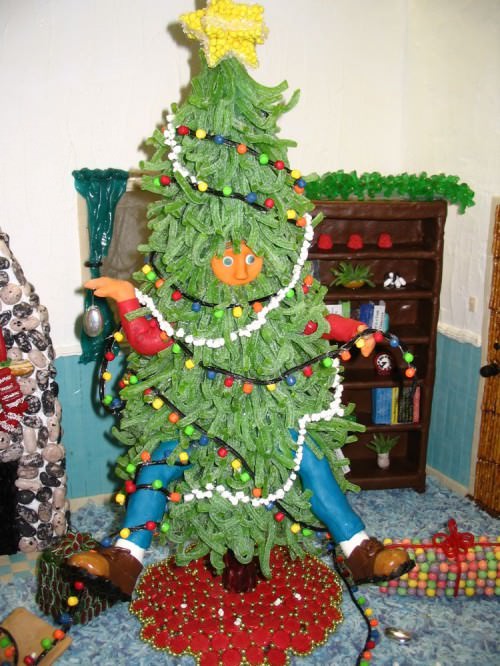 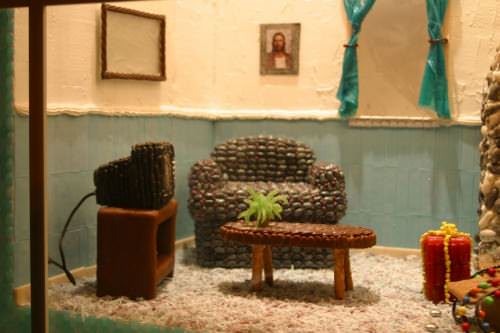 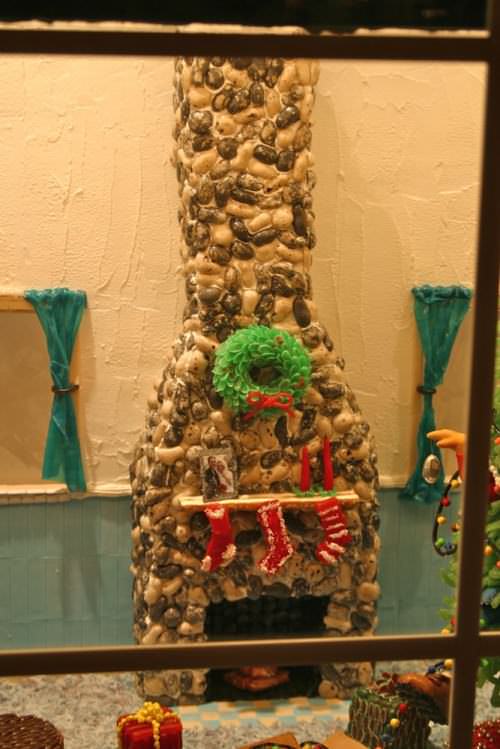 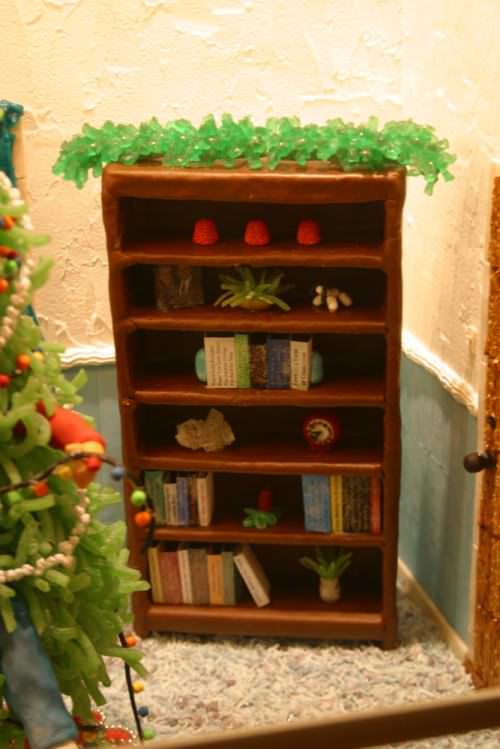 These three men were the first to suggest and petition the idea of Daylight Saving.Â  They couldn’t have known, but their actions have nearly been the death of me.

I usually don’t make a big deal out of the time changes with myself or with my kids.Â  We just act as if the new time were the old time and live our lives accordingly.Â  No problem.

No problem, that is, until a few weeks ago.Â  Just as I was entering the blessed second trimester of pregnancy and my tiredness was getting under control, Daylight Saving time hit.

This past time change has been HORRIBLE. Before the time change I had two angels who went to bed around 7:30 p.m. and woke up around 8:00 a.m.Â  I realize I was spoiled with my little girls sleeping in so late, but I was ever so grateful for it.Â  Some people can get by with five or six hours of sleep.Â  Others need the standard eight.Â  I’m more of a ten-hour-a-night gal (even when I’m not pregnant).

And it’s been that way ever since.Â  The girls have not adjusted their wake-up time.Â  No matter how early or how late I put them to bed, they are awake before the sun is even thinking of rising.Â  I might be able to understand if they were waking up a mere hour earlier than they used to, but it’s more like two hours earlier!Â  We’ve started our mornings in the five o’clock hour so many times this past month that I have lost track.

It didn’t help that in the middle of all this time-changing nonsense Caroline discovered how to turn on the bedroom light.Â  The only place in the girls’ room for the crib is right next to the light switch.Â  Caroline has been blissfully unaware of the power that could be hers…until lately.

Not only would the girls wake up super early in the morning, but Caroline would turn on the light in the middle of the night and wake Brooke up, who in turn would yell at Caroline and wake everyone else up.

Dallas and I got smart.Â  We taped the light switch down.Â  Ha!Â  Now she couldn’t access the switch.

That lasted a few days.Â  Caroline quickly learned how to pick the tape off and continue aggravating all of the would-be sleepers in the house.

Dallas and I got smart again.Â  Dallas constructed a barrier so her little hands couldn’t access the switch. 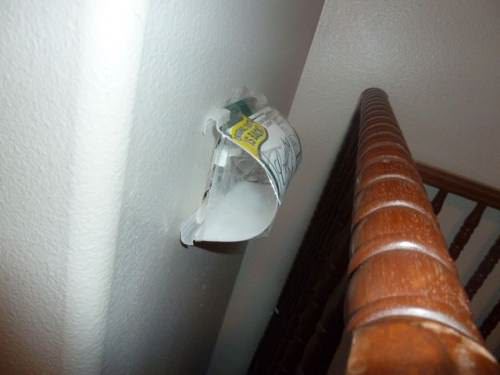 That didn’t work at all.Â  Her little hands could still access the switch.

Dallas and I got smart.Â  We taped the sides of our new contraption so her little hands couldn’t access the switch.

Dallas and I got desperate.Â  We scoured the Internet for a light switch cover.Â  Surely something had to exist; we aren’t the only ones in the world with this problem, right?!

Dallas hit the jackpot. He found a light switch cover that locks the switch in the on or off position.Â  It was love at first sight.Â  We bought it as fast as we could.

FINALLY, a device that little hands don’t know how to work.Â  At least, not this week.

Finally we were able to settle into our beds to sleep without worrying about the chaos two little hands could cause.

Finally a device that would help me and Dallas get a full night’s sleep again.

…And then my feet started to itch.Â  But that’s a story for another day.

This year I wasn’t planning on doing anything extravagant with our costumes.Â  You remember last year’s costumes? Well, this year I had no such motivation.Â  However, I had an idea last minute and went with it.

This costume is a little more…shall we say…revealing…than costumes I’m used to, but I couldn’t resist: 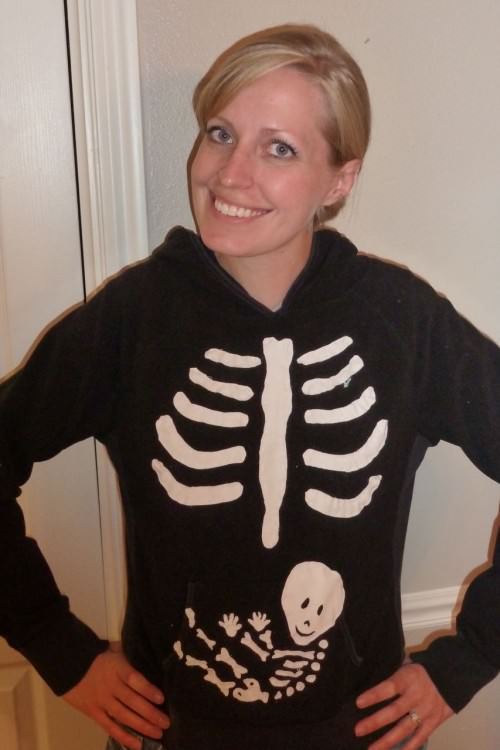 I don’t know how you’ll react, but this costume has been enough to freak me and Dallas out.Â  Talk about scary!

With that costume as inspiration, we turned into a skeleton family.

I’m mad Caroline is blurry.Â  Turns out Brooke doesn’t have a black shirt, and I didn’t want to buy one.Â  Luckily, someone at the party happened to have a skeleton shirt just Brooke’s size and they let us borrow it.Â  How nice! 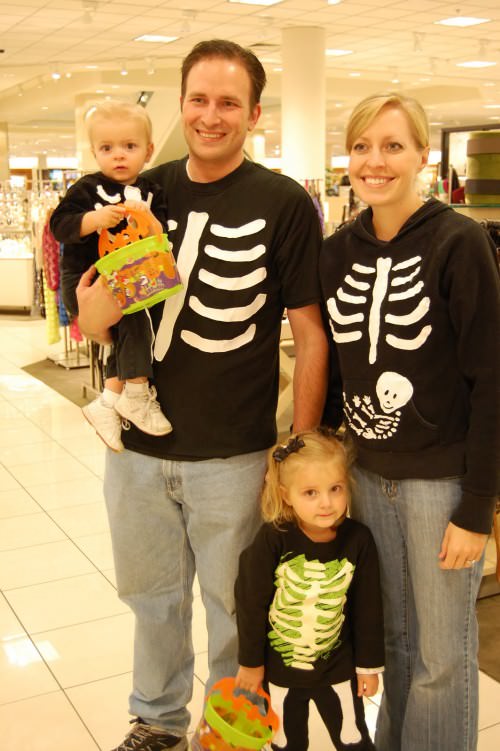 We met up with our friends, the Fraziers, and trick-or-treated with them at the mall.Â  It was crowded, but we preferred that over getting rained on!

Check out the Fraziers’ costumes: 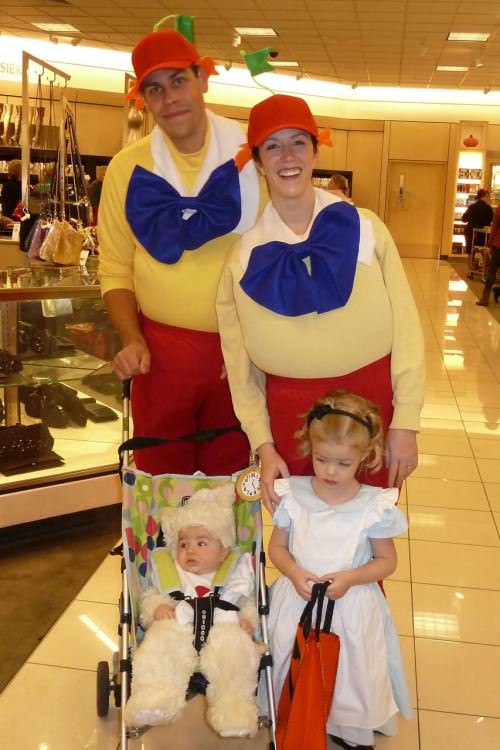 Don’t you want to be their friends now, too?Â  They are the characters from Alice in Wonderland – Alice, the White Rabbit, Tweedledee, and Tweedledum.

These next pictures show our annual Halloween party with my Mom’s side of the family.Â  This is mostly for my parents’ benefit as they were not there to see the costumes since they were attending the First Annual Glen Thomas Family Reunion in Omaha, Nebraska.Â  Some of us didn’t like the idea of a fourteen-hour car drive merely to visit our siblings whom we never see, so we didn’t attend. 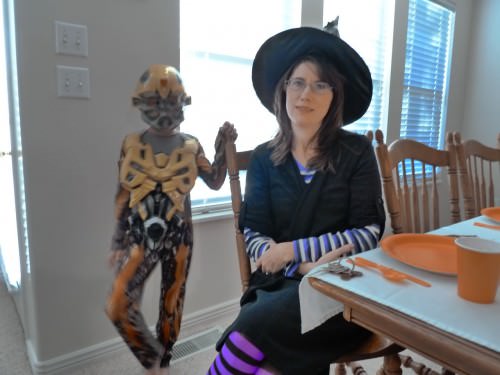 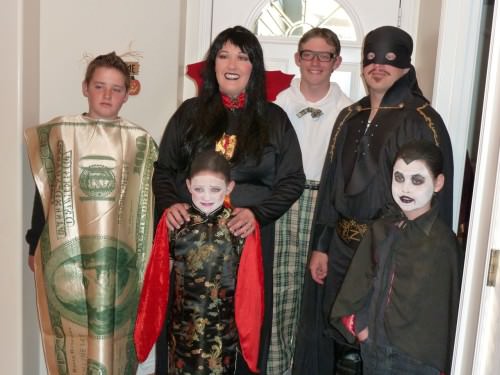 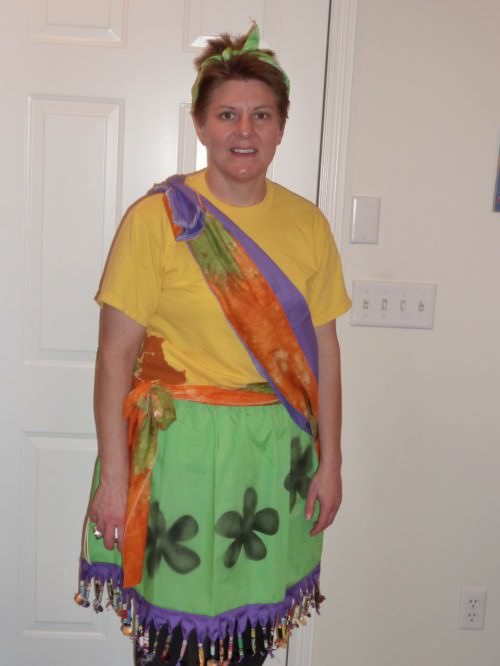 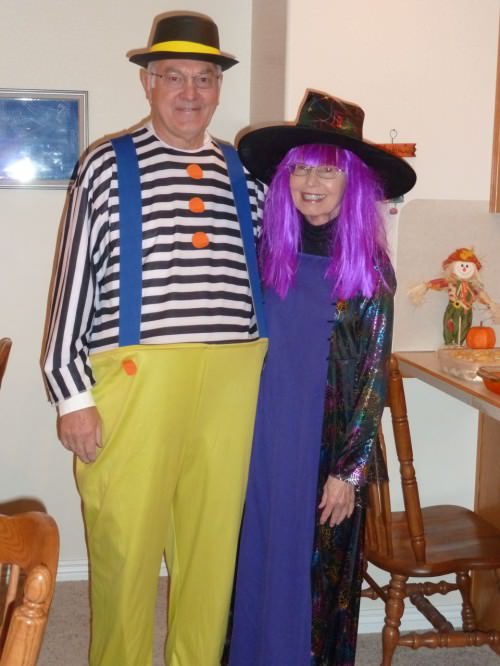 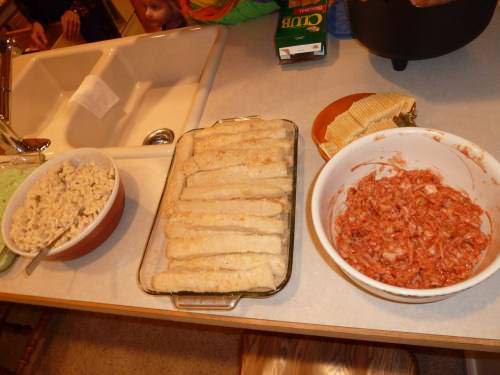 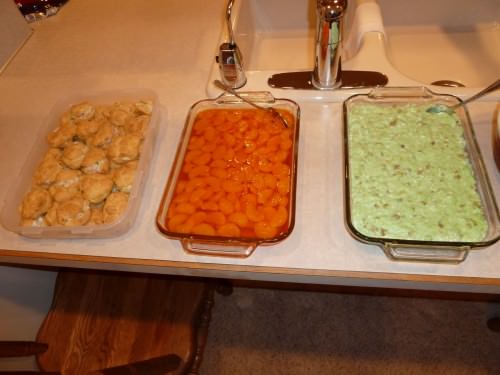 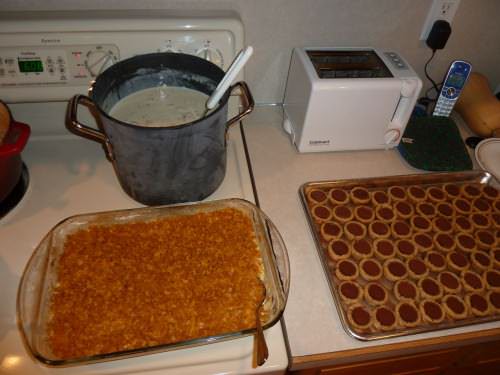 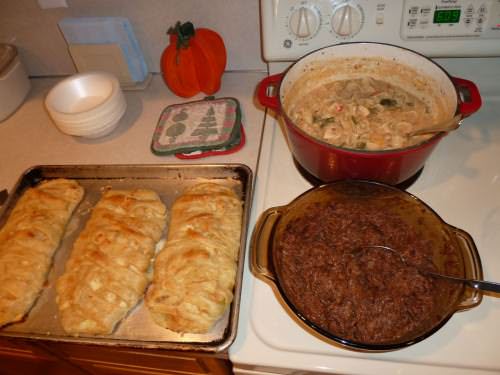 There was tons of food and this dinner was deemed by all as the most successful potluck we’ve had to date.Â  So, Mom and Dad, was the visit to Omaha worth missing this?