Where to begin?  Our blog has been a little neglected this past month.  We’ve packed up our condo, moved in with my parents, bought a house, and are now fixing it up and making it our own before we move in.

Here are some pictures of the progress we’ve made so far.  This is us in front of our new home.  Yes, a fresh coat of paint on the door and frame are on our to-do list: 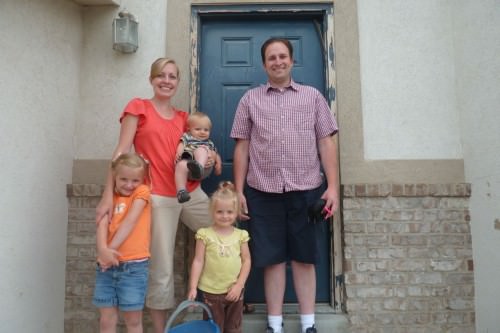 First up – removing all the carpet: 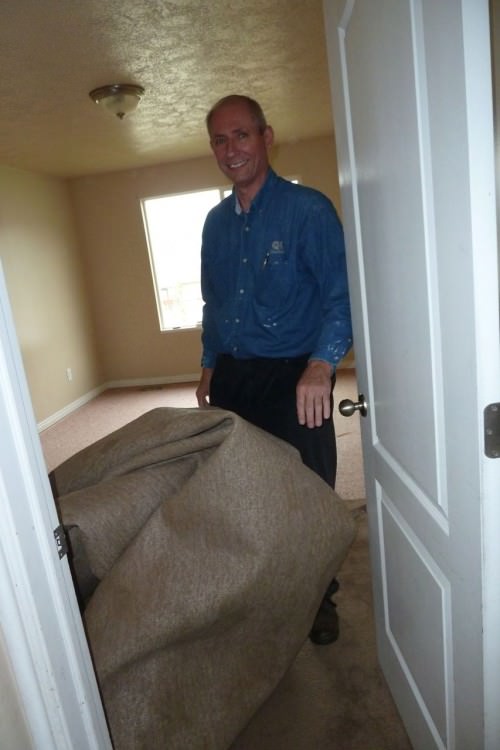 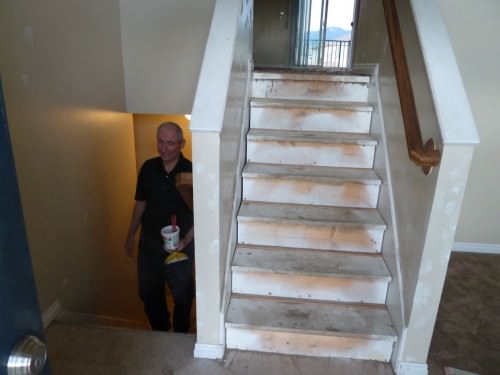 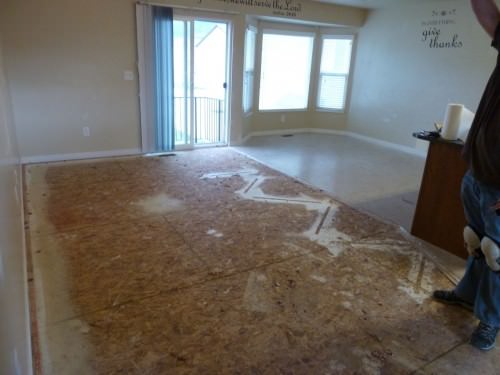 Next up – the ceremonial removing of the sock.  Apparently one of the kids from the family that lived there before threw a sock up above the coat closet in a hard-to-reach spot.  We had noticed it when we first looked at the house and wondered whether it would still be there when we moved in.  It was, and my dad was happy to get rid of the orphaned sock: 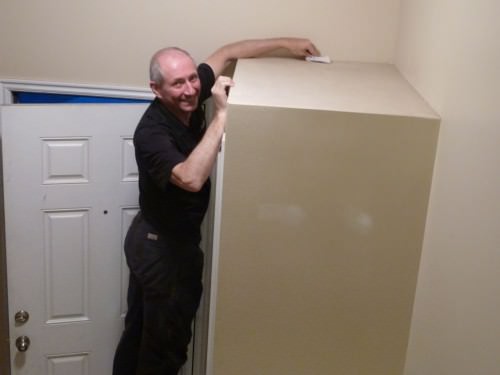 The linoleum had some holes in it so we needed to rip that up, too: 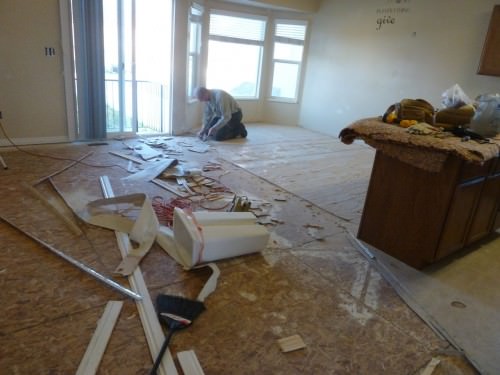 While we were at it, we decided to remove the island and we’ll reattach it in a different spot to open the kitchen up a little bit: 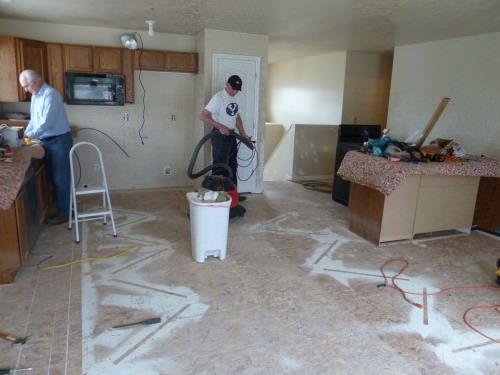 My Grandpa, an electrician, got in on the action.  He was found perched on a ladder most of the time working on making all of my lighting dreams come true: 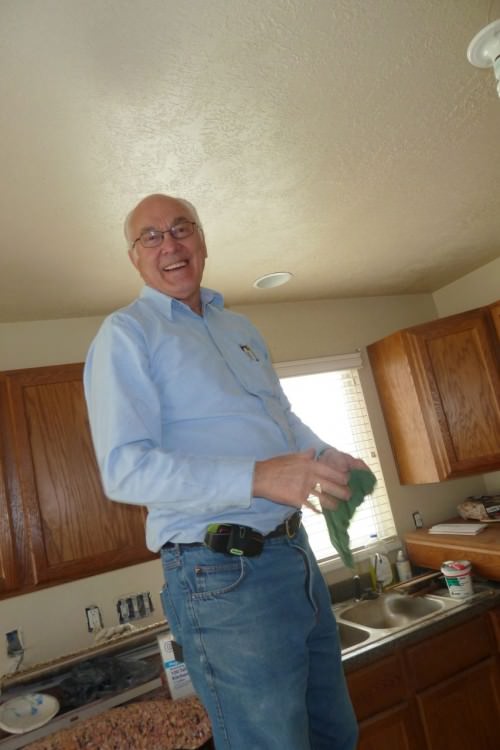 Honorable mentions go out to my uncle and cousin who also came for a bit to lend a hand.

Dallas was our spackle master: 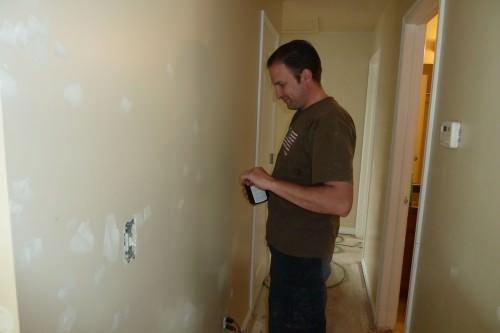 He found one or two places that needed filling in: 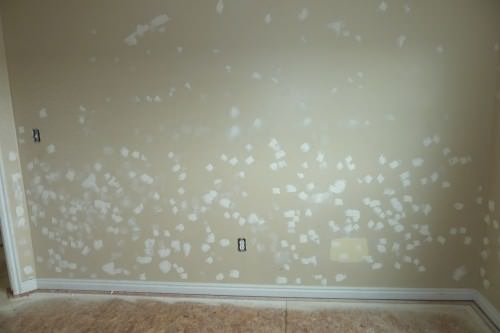 It fell to me to clean the bathrooms: 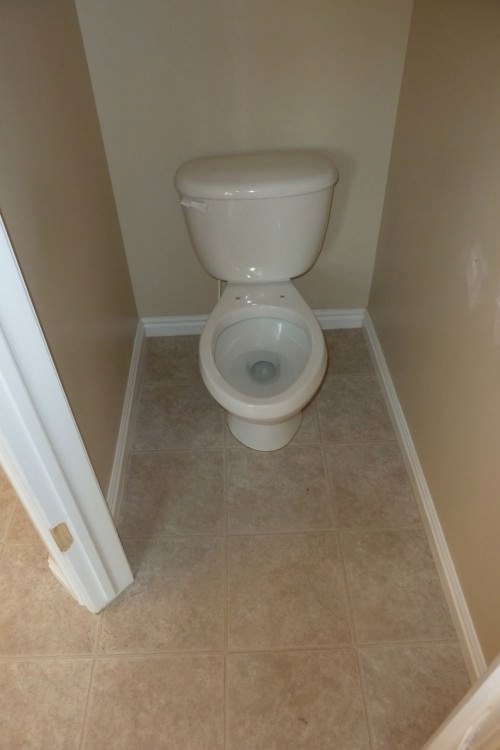 All of the manual labor was rough on my dad’s knees.  He got blisters on his knees that were pretty painful.  Caroline and Brooke were trying to figure out which was worse – his knees or his messy hair: 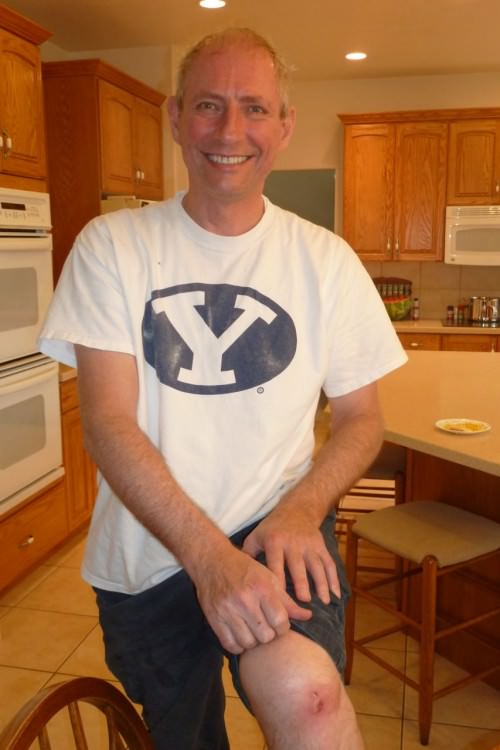 We have a move-in date set for two weeks from yesterday.  Can we do it?  We have little room for failure as my brother and his family are coming at that time so we’re getting kicked out of my parents’ house to make room for the visitors.  Wish us luck!

When we first looked at our soon to be new come here is what we saw.

When we returned with the inspector now that reality of actual ownership is upon us, this is what we saw 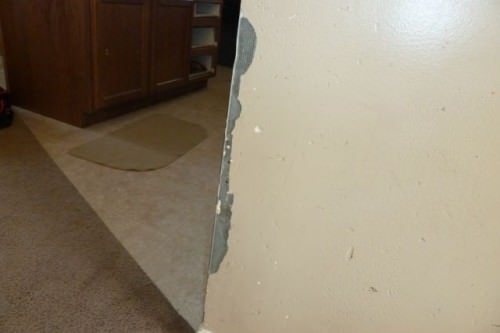 Hopefully with some tender loving care we can return to the higher vision of our new estate and our home can be the mansion it was in our mind .  It is still over double the size of our current home.  In my mind it is still a mansion because we have far more space than we know what to do with.

A New Member of the Family

Hello Internet!  Did you miss me?  I missed you.

About two weeks ago our computer died.  Totally died.  We knew the computer was nearing the end of its mortal life, but that didn’t make the loss any easier to bear.

Do you know how hard it is not to have a computer?

I couldn’t cook because all my recipes were on it.

I couldn’t drive anywhere new because I couldn’t get directions.

I couldn’t look up any phone numbers.

I couldn’t print off documents that I needed to sign and email them back.

I couldn’t comment on blogs or create new posts or check facebook or read the news or pin things to my (nonexistent) Pinterest account or do any other manner of things to waste time online.

It was actually kind of freeing to be disconnected from everything in a way.

In another way it was just really irritating and inconvenient.

Dallas ordered a new computer and it arrived three days ahead of schedule making Dallas a very happy man. 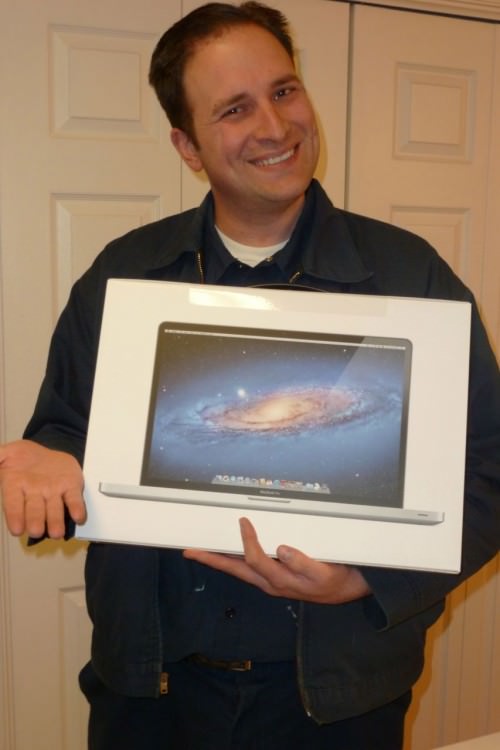 Welcome to the family MacBook!  We vow never to take your existence for granted.

Remember I made capes for the girls for Christmas?  And that they didn’t care about them at all?

In my quest to force the girls to like their capes, I hastily cut out some mini capes for their animal friends. 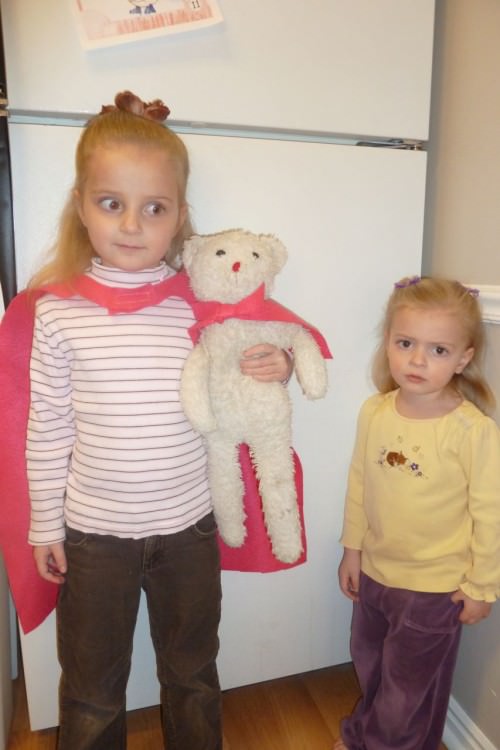 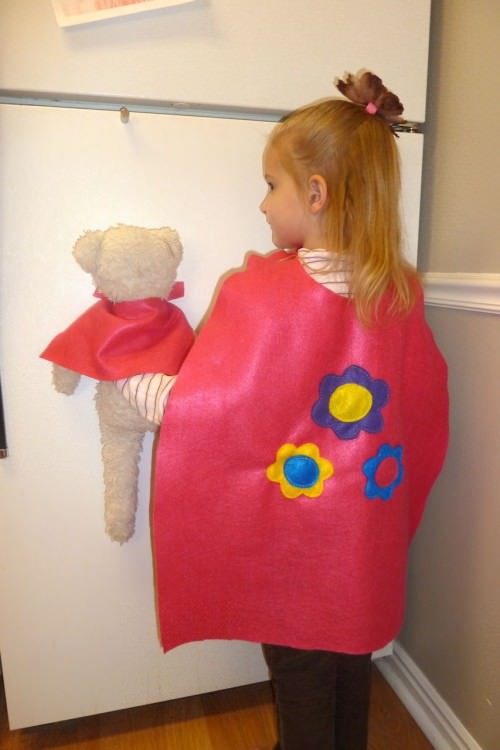 Also adding to the fun is a mattress: 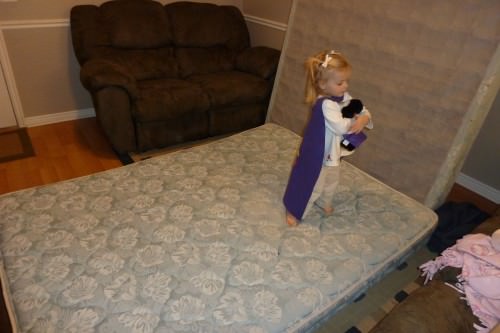 My grandparents gave us their bed.  We’re working on getting rid of our old bed, but in the meantime the girls have LOVED their indoor trampoline.

I haven’t always had such strong emotions about the little insects.  At most, I thought they were merely an annoyance.  That was until the Golden Fruit Fly Infestation of 2011.

We were given a bag of cherry tomatoes.  The tomatoes were so good, and we were heartily enjoying them.  However, when we made it to the bottom of the bag, we found a squished tomato.  Disturbing that tomato caused a cloud of fruit flies to scatter all throughout our kitchen.  At the time, neither Dallas nor I knew the misery that was in store.

The fruit flies annoyed us for a few days, but we weren’t too worried.  They only have a life span of a few days, and we’ve had fruit flies here and there before.  They just die out and we move on with our lives.  However, after a few days, I realized the fruit flies were not going away; in fact, I was pretty sure they were multiplying.  Thus began our crusade to rid our house of those irritating things.

We researched how to get rid of fruit flies online and made three traps. 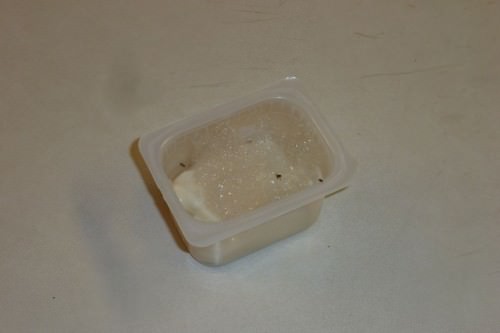 We filled a container with yogurt and put soap bubbles on top.  The soap bubbles were supposed to trap the fruit flies.  Most flies were too smart for this trap.  They waited until the bubbles had popped and then went after the yogurt.  We only caught a few.

I was sure this would work.  I had talked to my brother who told me he had a fruit fly infestation a while ago and they got rid of the flies with fly tape.  I decided to concoct my own tape trap. 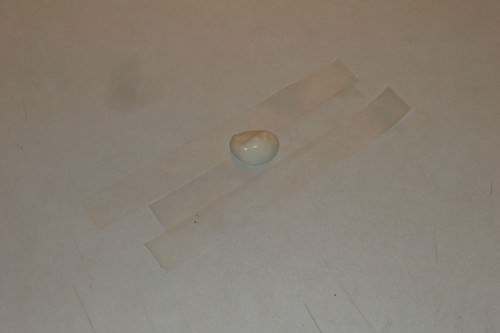 Yep, there it is in all its glory.  Scotch tape sticky side up with a glob of yogurt in the middle to entice the flies.  This trap caught exactly one fruit fly. 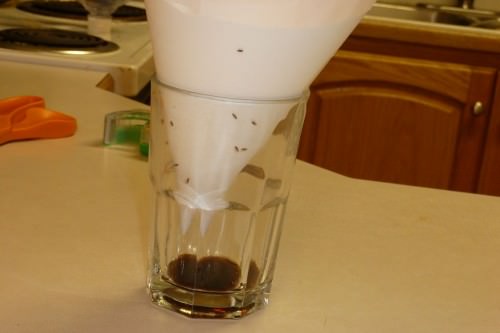 This was by far the most effective trap.  You simply make a funnel with paper and put something inside the cup that the flies want.  They go down the funnel to get the goods, but can’t find their way back out.  I was skeptical of this method, but it’s been the only thing that has worked.

I finally broke down and bought real fly tape on my brother’s glowing recommendation.  The real fly tape was just about as effective for us as my Scotch tape trap was.  I had such high hopes that I would wake up to find hundreds of dead flies on the tape.  No such luck.

We’ve put more funnel traps out and I think I’m finally noticing a decrease in the flies.  At least for today.  Does anyone out there have any other tricks we should try?  I can feel my sanity slowly slipping with each new batch of flies that I spot.