You know how sometimes someone makes a joke at your expense or teases you about a quirk that you have but then adds, “Just kidding!” at the end of the comment?Â  That way they clear themselves of potentially offending you, but it often leaves you a little nervous wondering exactly how much truth was actually in the statement?

Caroline has been mildly sick.

It all started with Brooke.Â  Brooke got a little cold.Â  No big deal really–just a bit of a runny nose.

A couple of days after Brooke’s runny nose started, Caroline got a stuffy nose and her eyes were really watery.Â  She also ran a tiny bit of a fever.Â  I gave her some Tylenol.Â  I wasn’t worried.

Then I happened to mention to my Mom that Caroline was a bit sick and I gave her Tylenol.Â  My Mom proceeded to freak out which in turn made me wonder if I should have been freaking out all this time.Â  I had actually been priding myself for NOT getting overdramatic about this turn of events.

My Mom said that since Caroline was still under two months old and that since she had a fever I should call the doctor right away.Â  I didn’t.

The next day Caroline seemed a lot better.Â  However, at the end of the day she felt warm again.Â  I took her temperature and it was slightly elevated.Â  It was after the doctor’s office hours, but I phoned the on-call nurse.

I told her Caroline had a slight fever.Â  My question was whether it was indeed okay to be giving her Tylenol since she was so young or if I was inadvertently killing her.

The nurse dismissed the fever.Â  She said it could hardly even be considered a fever.Â  They don’t get worried until it’s over 100.4.Â  I knew this.Â  Then I happened to mention that she also had watery eyes and some congestion.Â  She immediately said, “What?Â  She has other symptoms, too?Â  Oh, the doctor will want to see her.Â  How soon can you bring her in?”

It was a Friday night at about 7:30.Â  Apparently this was serious enough that I had to bring her in after hours?!

We made the appointment for 8:00 that night.Â  Dallas was at work, so I had to load up both girls and take them by myself.

One thing that still terrifies me about having two kids is taking them somewhere by myself.Â  Brooke has a tendency to run as fast as she can in the opposite direction.Â  It’s nearly impossible for me to keep up, especially when I am lugging a car seat as well.

We made it to the office without incident and got called in.Â  They weighed Caroline.Â  She is weighing in at a hefty 10 pounds 15 ounces.Â  Where has my baby gone?Â  They took her temperature.Â  The doctor came in.Â  He basically said the temperature wasn’t much cause for alarm, but they want to check her out anyways because in babies younger than three months, there’s a one in twenty chance that a baby with a temperature does have something that they need to treat, whereas in an older baby, it’s more like a one in a couple thousand chance.

He looked Caroline over.Â  He noted the bleary eyes and stuffy nose.Â  Then he listened to her breathe.Â  He listened and he kept listening.Â  Then he asked, “Was she okay for her two-week checkup?”Â  I said yes.Â  He said, “She didn’t have any problems?”Â  I said no. Then he said, “Oh.Â  Because I think I’m hearing a heart murmur.”

I waited in deathly silence while he listened for several more minutes to Caroline breathing.Â  Then he said, “Nope.Â  She’s fine.Â  Call us if any of her symptoms worsen.”

He in essence said, “Your daughter has a heart defect that could be very serious and may affect her for the rest of her life.Â  JUST KIDDING!”

I’m left wondering if he did in fact momentarily hear something amiss.Â  Well, her two-month checkup is next week.Â  We’ll hope all is well. 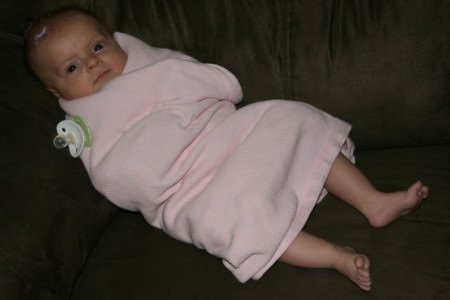 The Face I Often See Her Inspiration? Jackson Pollock