Brooke has learned how to make a joke.

The poor girl has been battling diarrhea for a couple of weeks.Â  Her little bottom sorely suffered from the unpleasantness.Â  She had the worst case of diaper rash in the history of her short life.Â  Trying to change her diaper was like trying to get a bucking bronco to hold still while tying a bow around his tail.

Bath time used to be a fun time, but with the diaper rash the water would sting her bum and send her into convulsions.Â  She would cry, “Done!” and want to be let out the second she got in.

Luckily, she seems to finally be getting better.Â  Her backside has had time to heal and the diaper rash is nearly gone.

This means bath time should return to being fun.Â  And it is, just in a different way.

Now I stick Brooke in the bathtub and the moment she sits down she looks up at me with a mischievous grin and says, “Done!”Â  Then she looks so proud of herself.Â  I say, “No, we’re not done yet!” and then she giggles at her clever joke.

I must admit, she is pretty clever. 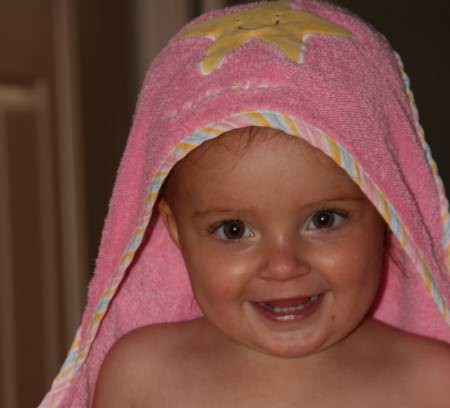