My last post was all about Caroline. If thereâ€™s anyone whoâ€™s more neglected on our blog than Caroline, it would be Dallas. I think itâ€™s about time I wrote a post all about him. Iâ€™ll try not to make you gag as I dote on him for a moment.

One day when we were dating, we went swimming in the pool at my apartment complex. We had finished swimming and were lounging on chairs drying off when Dallas suddenly stopped what he was doing, focused intently on a nearby garden hose, and got an idea.

Before I knew it, Dallas was back in the pool with one end of the hose in hand. Inexplicably, he put his mouth on that end and blew. After a few good puffs, the water that had been trapped in the hose was pushed out the other end. Dallas gave a few extra blows for good measure, turned to me, and said, â€œWatch this!â€

He then proceeded to snorkel using the hose as his breathing apparatus. There was a kid nearby who watched in fascination as Dallas stayed under water for minutes on end. When Dallas was done channeling his inner child, he gave the boy a quick lesson on how to breathe through the hose and let him have a go. The boy was still snorkeling long after we left.

Another time when we were dating, we went to Walmart. As we approached the checkout, Dallas eyed the conveyor belt and the package of batteries in his hand that we were about to purchase. Before the checker or I could react, Dallas launched the batteries. They landed on the conveyor belt, skimmed across the place that scans bar codes, and then landed in the bag. It was an amazing feat of athleticism, brilliance, and skill.

A couple of months ago we were in the mall. I was ordering new contacts and Dallas was trying to keep Brooke from destroying everything in sight. He took her to a display of musical instruments and lifted her so she could play the sample keyboard. A few minutes later I heard Dallas plucking out a tune. He looked up at me with a flirtatious smile. I concentrated on trying to name that tune and realized he was playing Till There Was You. Aww.

Sometimes when weâ€™re driving, Dallas will suddenly shout out the name of a movie. A few seconds later Iâ€™ll spot what heâ€™s already seenâ€”a DVD playing in someone elseâ€™s car. He is so good at this game; I donâ€™t think heâ€™s ever been stumped. (It probably helps that the DVDs are usually playing for the benefit of the kids in the backseat, and kidsâ€™ movies just happen to be one of Dallasâ€™s favorite genres of movies.)

On one of our first dates, Dallas revealed his Kermit the Frog impression. It was very convincing. However, I think my favorite impression of his is Fran Drescher, followed closely by Gerald from Sid, the Science Kid.

I guess what Iâ€™m trying to say by recounting all these stories is that I think Dallas is one swell guy and that Iâ€™m really lucky that Iâ€™m married to him. He undeniably makes my life more spontaneous, lively, and meaningful. 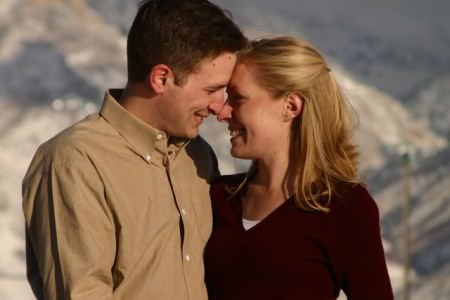