A couple of weeks ago Caroline got sick.  On a Sunday she got a fever which came on fast and hard and then left just as suddenly.  I kept her home from school on Monday to prevent spreading whatever she had even though she felt fine.  I learned you can take the girl out of the school but you can’t take the school out of the girl.  After saying good-bye to Brooke, Caroline got right to work setting up school for the day for her one pupil – Spencer.

Spencer was a good sport about being the student for a while.  After a good 45 minutes of playing I noticed him trying to inch toward his cars.  Teacher Caroline put a quick stop to that and Spencer was stuck playing for another mere two hours until he was saved by lunchtime.  Does it count as an absence if Caroline played school longer than she would have actually been in school had she been well?

The teacher and her (somewhat willing) student: 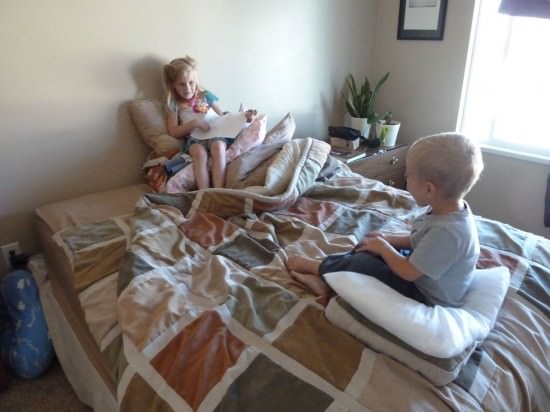