The Time Has Come

I’ve been dreading this day for 18 months.Â  Yesterday we decided to start the process of weaning Brooke from her pacifier.

It seemed like a good idea.Â  Up until now she really only used her pacifier to go to sleep.Â  However, lately I could see she was starting to get more attached to it and I wanted to end that before it got out of control.Â  She just learned how to say “paci” and would say it a lot.Â  She also figured out how to pull the basket containing her pacifiers off her shelf so she could get them.Â  When she got hurt, she would beg for paci.Â  Dallas and I decided that this week we’d get ourselves a paci-less daughter.

Dallas’s sister told us that she cut the ends of the pacifiers off a little at a time to wean her children.Â  That seemed like a good idea so we snipped Brooke’s pacifier.

It was HILARIOUS to watch Brooke try to figure out why her good friend paci wasn’t acting the way it was supposed to.Â  She would put it in her mouth in every direction, try to suck, and it wouldn’t work.Â  She’d take it out and inspect it.Â  I felt kind of bad for snipping her paci and a little worse for finding her predicament so funny.

We put her down for her nap.Â  I would walk by her room and hear murmers of “Paci,” and “Uh oh.”Â  It took her a while to fall asleep, but she finally did without too much fussing.Â  However, she didn’t sleep for very long.

Then it was bedtime.Â  Again we gave her paci and she was confused.Â  We put her to bed and again it took her a little longer to fall asleep, but once she did, she didn’t wake up until 8:30 in the morning.Â  Angel.

When we went in to get her, she’d chucked her pacifier out of the crib and didn’t care about retrieving it.Â  I think we’re making good progress.

She took a bad nap again today, but hopefully bedtime will be good.Â  We have our fingers crossed. 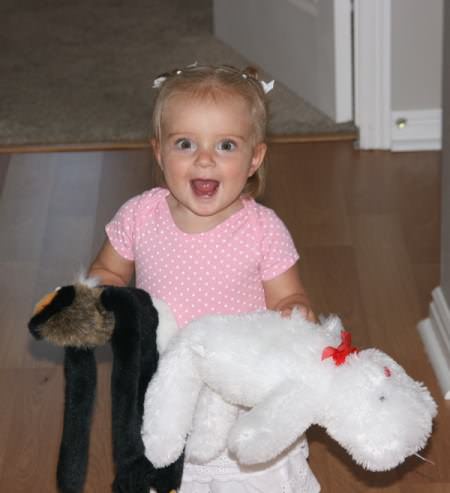 Picture of the Week Paci Update