I think I’ve mentioned once or twice (or in practically every blog post) that Brooke is pretty creative.  It’s one of our favorite things about her.  Here are some things she’s done lately that we’ve loved.

Someone introduced her to the game Twister.  It was so fun she had to come right home and make up her own version of the game: 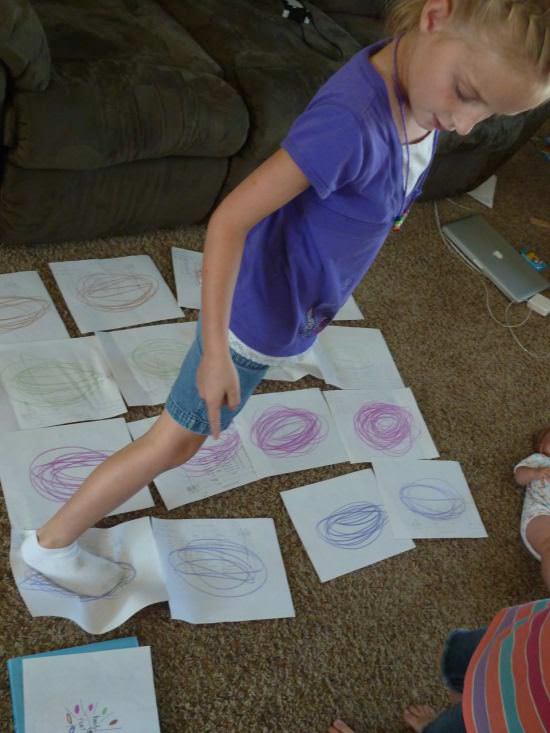 Here are more of her Play-Doh creations.  She designed dresses for her ponies and had a fashion show: 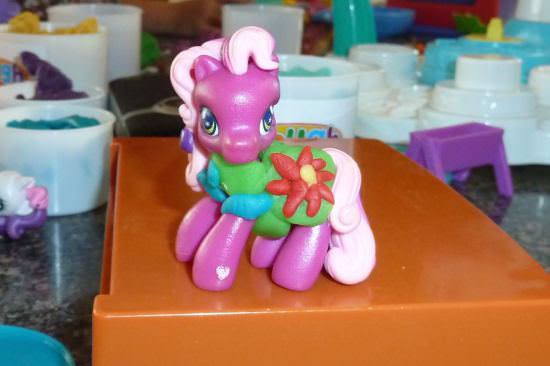 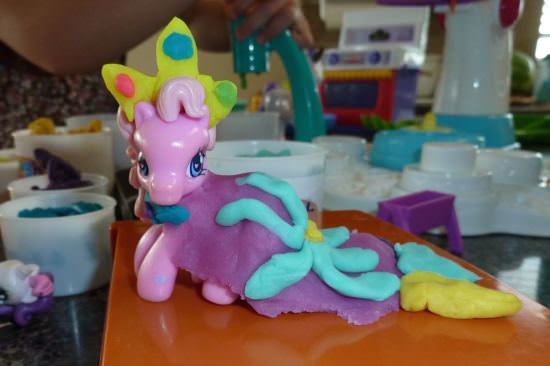 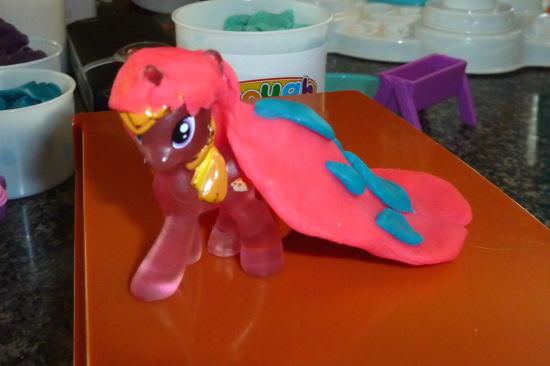 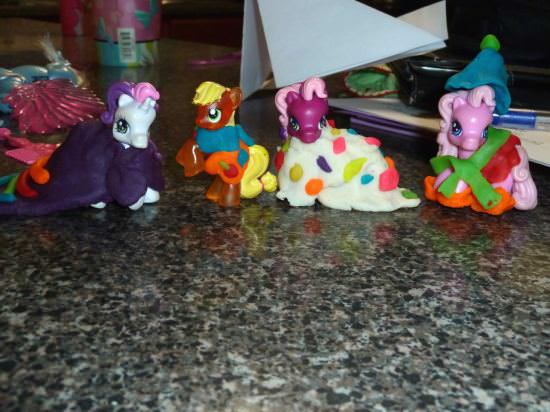 Then she made a pony band.  Notice the blue winged pony on the left is the conductor.  The pink pony at the top of the picture is playing the maracas, the one below that is on drums, then there’s an orange pony on the piano and the purple pony on the bottom is playing a horn: 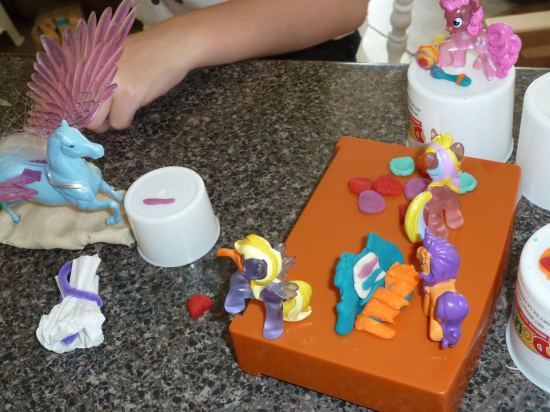 Here’s another view.  Now you can see the frog singing in his microphone and the orange pony at the top on the guitar: 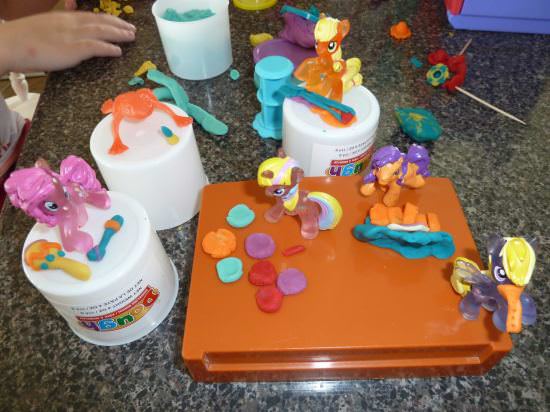 Brooke was mighty proud of her maraca.  (I was impressed, too!  That thing was pretty detailed for only being an inch long!) 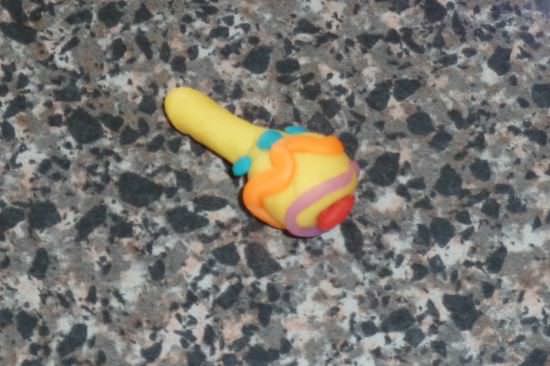 Brooke drew a picture for Dallas which was really cute: 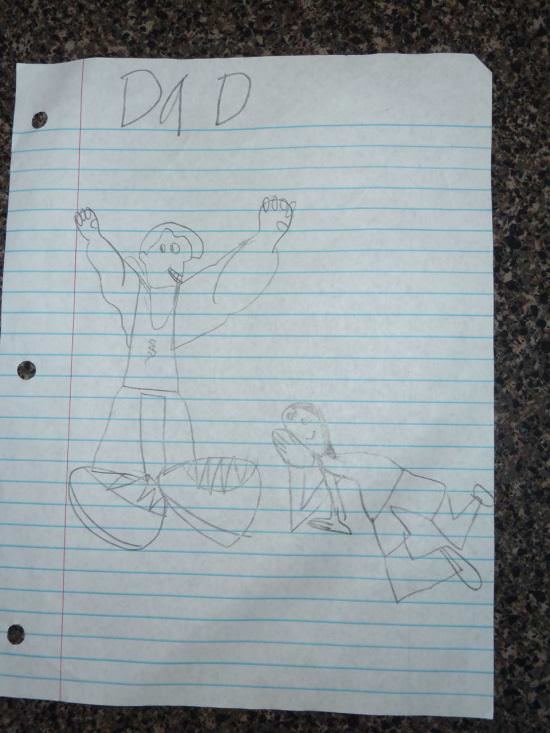 She drew this at church: 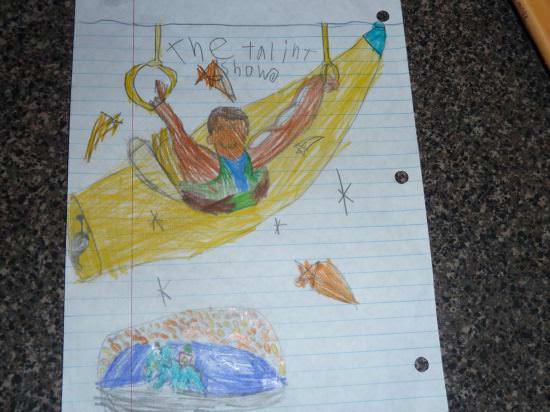 At first I couldn’t understand why the man was in a banana…until I realized it was a spotlight and the martian on the far left was actually the guy’s shadow.

The back of a school paper.  She said it was step-by-step instructions on how to draw a pencil:

Spelling is not Brooke’s best subject, possibly because spelling a word creatively means you’re spelling it wrong.  (Once she spelt skunk “ccunc” and that looked like a completely legitimate word to her.  This is what we’re dealing with here.)  We are constantly working on spelling, and it’s not fun for either of us.  Finally, one week, things were looking good.  The stars were aligning, and it appeared she was going to get all her words right.  When we got the test back, I saw she had drawn this on the back:

When asked about it she said, “It’s me clapping my hands because I knew I did great on the test!”  (The irony is not lost on me that she celebrated her correctly-spelled test by using misspelled words to congratulate herself.)

I had a pile of laundry to fold and had the brilliant idea to enlist Brooke’s help sorting the socks.  She’s old enough for that chore!  Why hadn’t I thought of this before?  Perhaps this is why.  Five minutes later no socks had been matched and instead Brooke had created a new member of the family – Snuffy:

Like I said, we love Brooke’s creativity.  Life around here just wouldn’t be the same without it.  Our blog would have very little content without her antics.   I love to highlight Brooke’s creativity because I’m fascinated with the things she comes up with. I love her crazy ideas.  I could stop this blog post right here and you’d all go on your merry way thinking that Brooke’s creativity is always happiness and sunshine and smiles and laughs.

I’ll be honest – at times Brooke’s creativity is also one of our least favorite things about her.  Her need to create and innovate is often frustrating and exhausting and is always messy and time consuming.  Take, for example, this:

Looks cute and creative, right?  Well, I hate it.  When I see that picture I don’t see the kind of creative that I love.  I see Brooke sitting down to do homework and 30 minutes later exactly zero percent of her homework is done because she had the idea to make a Lego desk organizer which is still in the stage of “almost done” (which it’s been in for the past 25 minutes) which means I’ve already been nagging Brooke to death to get going on her work while she has been basically ignoring me, so after thirty minutes of doing (no) homework we are both ready to be done with each other for the night and that was only the pregame show folks because thirty minutes in we still haven’t even started doing any of the actual homework yet!

In fact, at the time, I refused to take a picture of that Lego thing, I was so irritated with it.

The only reason there is a picture is because the next day my mom came over and saw it and oohed and aahed over it and said, “You got a picture of this for your blog, right?”  So I caved and snapped a picture.  There you go, Mom.

Then we have parent teacher conferences.  I live in fear of parent teacher conferences because we never really know what side of Brooke the teachers are seeing at school and her creative side isn’t always 100% appropriate or appreciated.  Some assignments don’t call for creativity which is great for people like me who like doing tasks that don’t require a lot of brain energy, but we have Brooke who will not accept that all she needs to do is read a passage and answer questions and be done with it.  No.  She has to distract herself with the “GO ON” at the bottom of each page, notice that the two O’s look like eyeballs, and decide to make each one into a face:

And really?  How could you not love that?  I love it.

On the same assessment this is one of her answers:

Perhaps you don’t need to be told that that was not the answer the teacher was looking for.

I am sure that Brooke’s creativity will serve her well in the end.  It’s just the getting-to-the-end part that I worry about.  I don’t want to stifle her creativity…unless I do want to stifle it so we can actually get some homework done.  I don’t want her to stop seeing faces in random places on her worksheets…unless I do want her to stop so she can finish her tests.  I don’t want her to stop making messes as she creates…unless I’m trying to keep the house clean.  I don’t want her to stop turning random, household items into other things…unless I ever want to get the laundry folded and put away.  It’s so hard to know how to encourage her to use her mind to think outside the box while still figuring out how to help her see there are certain situations where you just need to do what you’re told without coming up with your own spin on it.  It’s hard for me to know how to let her know I am delighted by the doodles on her school papers, but I’m also troubled that they’re even there in the first place because shouldn’t she have been focusing on answering the questions?  See?  Conundrum.

Someday Brooke will probably read this and I hope that when she does she has learned how to use this gift in wonderful ways. I’m sure she will.  If anyone can figure it out, it’s her, right?  I also hope she feels like Dallas and I were able to help her spread her creative wings appropriately.

One application that doesn’t get enough use in our house is Photo Booth.  Whenever it’s used raucous laughter reigns. I’ve included both the original picture and the Photo Boothed one.  It’s up to you to figure out which one is real life…