How We Survive Church With a Toddler

Spencer is being increasingly…how can I say this…a joy to be around during sacrament meeting at church.  A complete joy if your idea of happiness is trying to keep a two-year-old content and quiet and in your pew for over an hour each week as you slowly lose your will to live.

One week Spencer was having a fun time trying to surreptitiously inch his way out of our pew into the aisle.  Every time he’d go too far I’d grab him, and he’d start flailing his arms and whining.  When he realized I wouldn’t let him escape, he’d creep as far as he could and then throw a toy into the aisle knowing that someone would have to be set free for a few moments to grab the item and surely hoping that he’d be the one allowed.  How can kids be so scheming at such a young age?!

In a fit of absolute desperation, I grabbed a piece of paper and started drawing vehicles on it.  I started with a helicopter.  Once Spencer could make out what it was, he ran over, climbed up on my lap, and stayed there motionless for the rest of the meeting moving only long enough to point to each new picture I drew, state its name, and make a request for the next vehicle I should draw.

This little paper has been our church lifesaver: 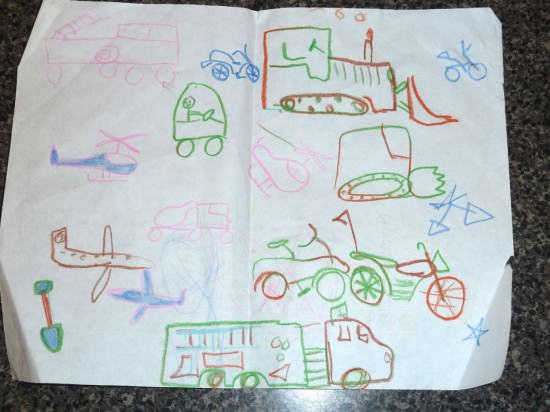 I now keep it in our diaper bag and anytime Spencer gets restless I can whip it out and ask him to find something on it and that will keep him still and happy for at least a few minutes (especially if I ask him to find the cement truck because my sketch doesn’t really resemble one, so he always gets stumped).

I have realized I’m beyond horrible at drawing cars and trucks.  Maybe I’m not very observant?  I just have no idea how the wheels connect to the body of the car or what shape the vehicle is or anything like that.  At one point Spencer asked for a motorcycle.  I can totally imagine how a motorcycle looks in my head, but I cannot transfer that image to paper as is evident by the “motorcycle” that I drew.  (See below in the yellow box.  My motorcycle is on the left.) 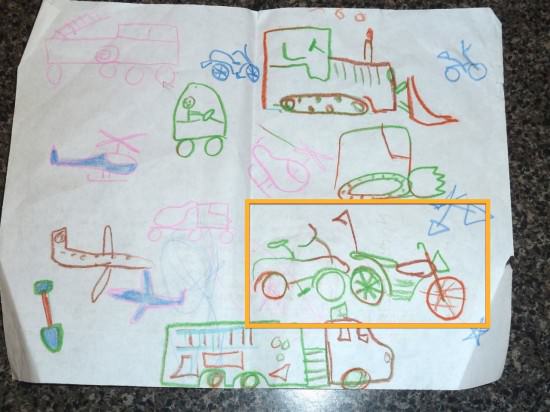 As I was drawing, Spencer kept saying, “No!  A motorcycle!  No, Mom, a motorcycle!  Not that!”  Since my drawing certainly wasn’t doing the trick, I passed the paper off to Dallas.  Dallas simply drew a circle for the front wheel and Spencer started getting giddy, bouncing up and down, and saying, “Yes!  Yes!”  Then Dallas drew the line from the center of the wheel up to make the handlebar and Spencer nearly hyperventilated from excitement.  “Yes!  A motorcycle!  A motorcycle!”

I happened to be in the Dollar Store and saw a coloring book that had cars and trucks in it.  I’ve never seen Spencer take much interest in coloring, but I decided to get it and pull it out next time we were at church to see if he would like it.  Two Sundays ago that coloring book made its church debut, and Spencer sat and coloring quietly and happily the entire time.

He even found it when we got home and got busy coloring.  You’ll have to excuse his face.  Lately he’s been squishing his lips over to one side of his face making this expression: 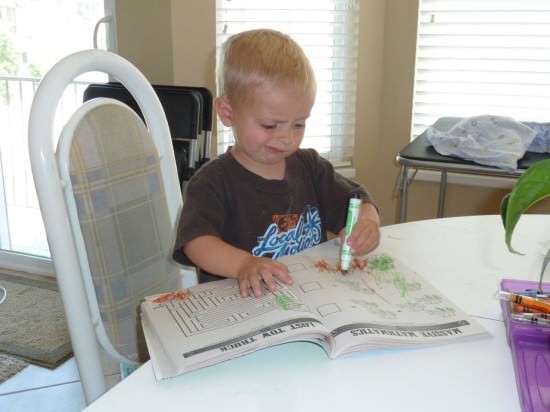 Sometimes he also makes this expression: 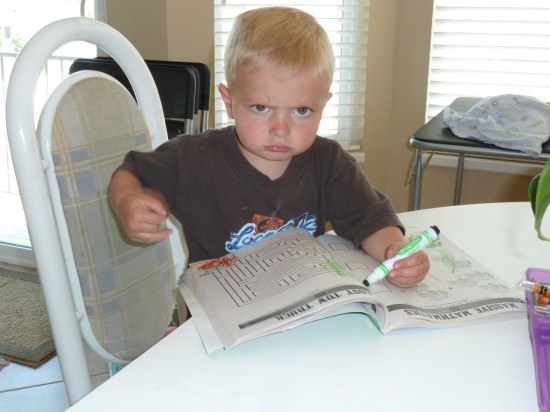 He wasn’t appreciating our photo shoot and wanted me to color with him instead. 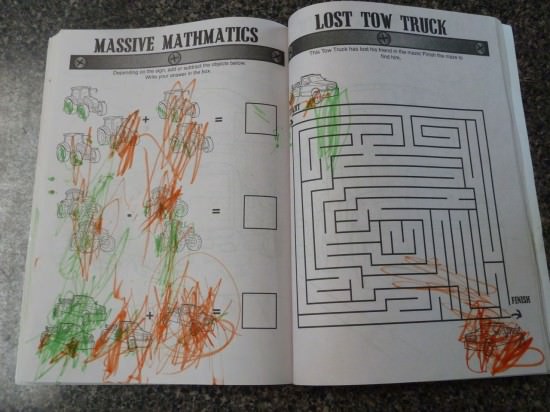 This past Sunday the coloring book again worked its magic.  Thank you, Dollar Store!  That coloring book may very well be our key to church activity for the next little while.