We’ve finally come to the end of our Disney trip.  The final day.  Am I the only one out there that’s sad that this series of Disney posts is coming to a close?

Don’t answer that.  You know you find looking at other people’s vacation photos riveting.

Our last full day started with the kids watching Disney shows while the grown-ups got ready: 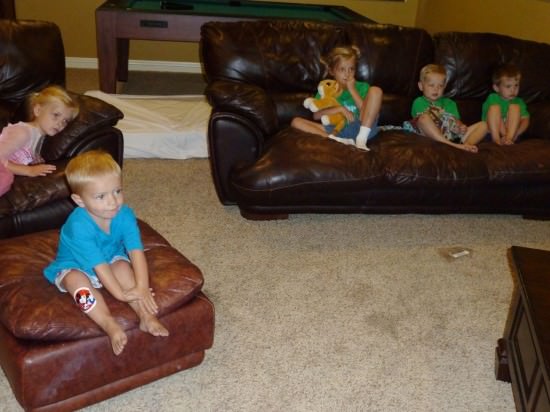 Caroline decided she had had enough of the matching shirts and chose to be a princess instead: 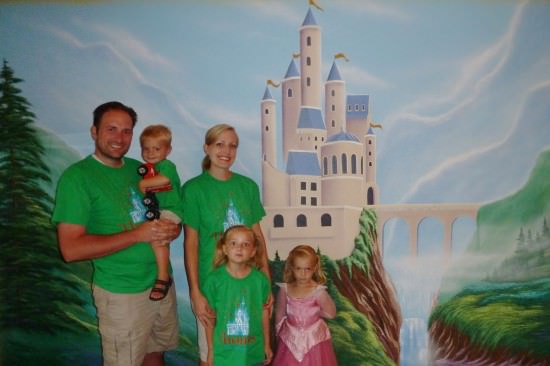 She got into her princess dress and said, “Now I want my picture taken with Mickey and Minnie.”  I started trying to explain to her that it’s hard to just run into Mickey and Minnie, and we might not see them together, so don’t be sad, blah, blah, blah.  Then I saw she had gathered the house’s stuffed Mickey and Minnie and was already posing for her picture: 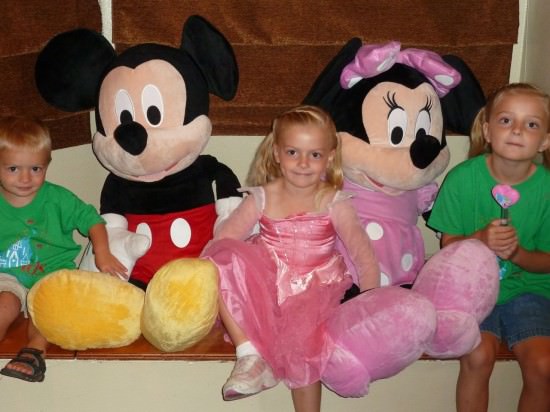 Well, fulfilling that picture desire was easier than I expected. 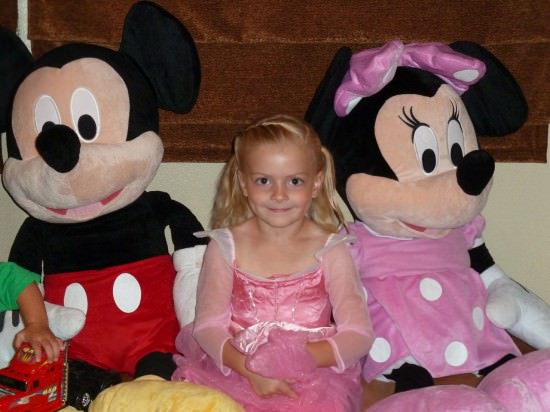 The Toy Story ride had been closed all week.  It finally opened on Friday so we went there first thing: 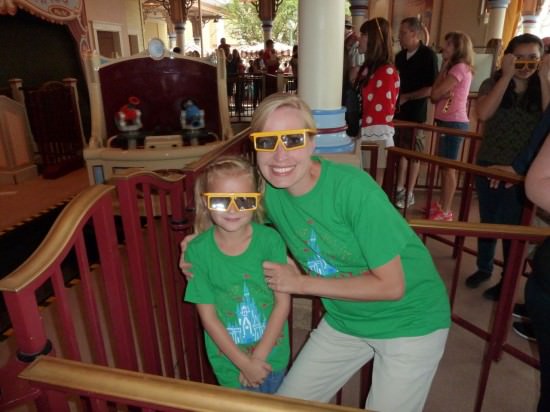 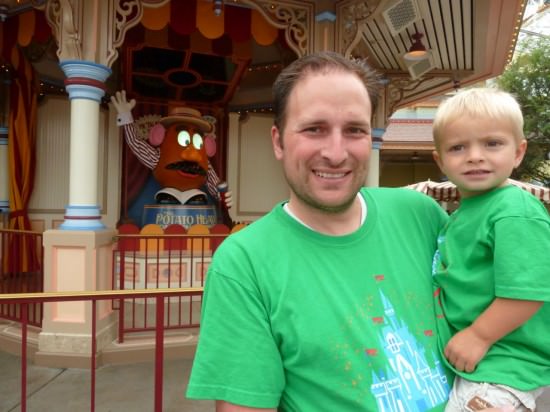 We went to A Bug’s Land again to do some rides we missed and we ran into Flik: 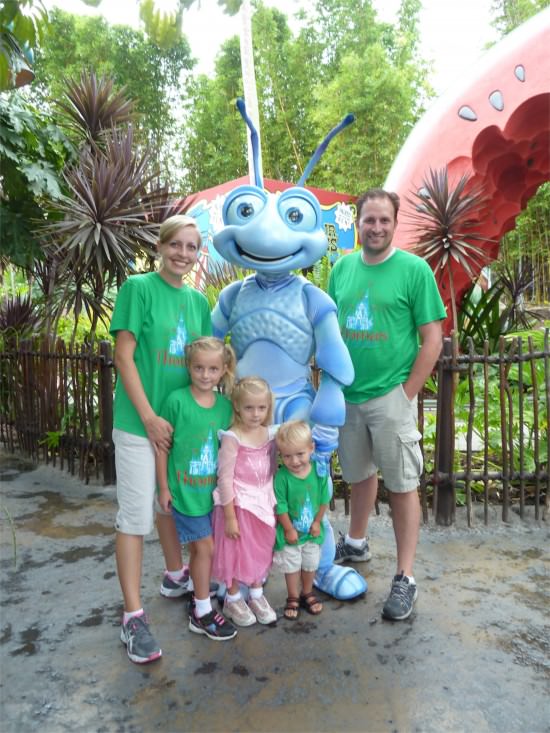 Brooke had fun trying to dodge the water: 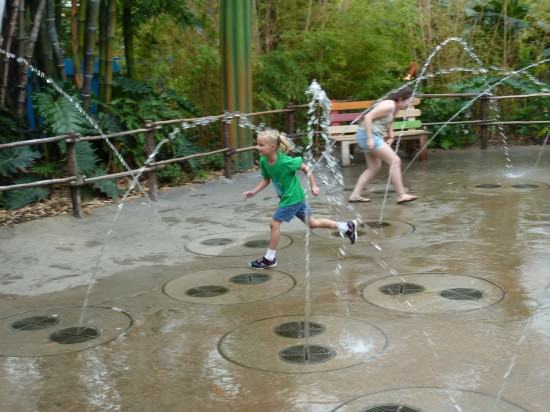 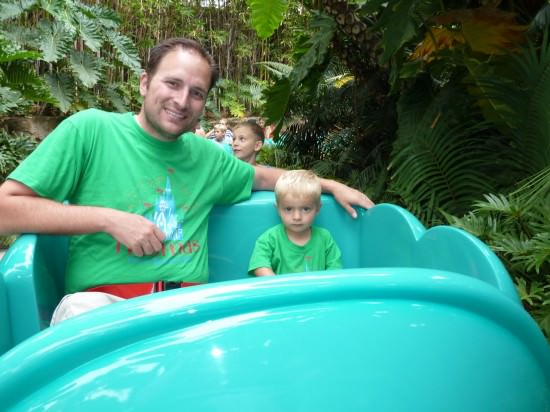 Caroline got comfortable while we waited for the Muppet Show to start: 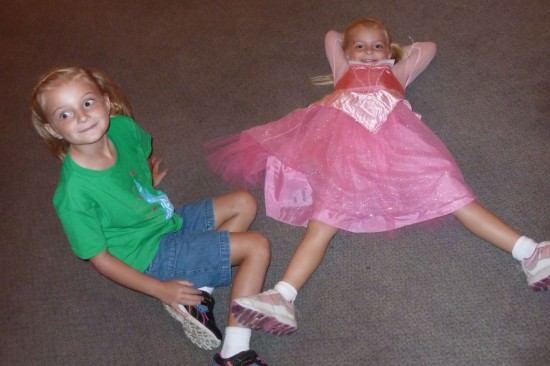 Spencer and Dallas also took a load off: 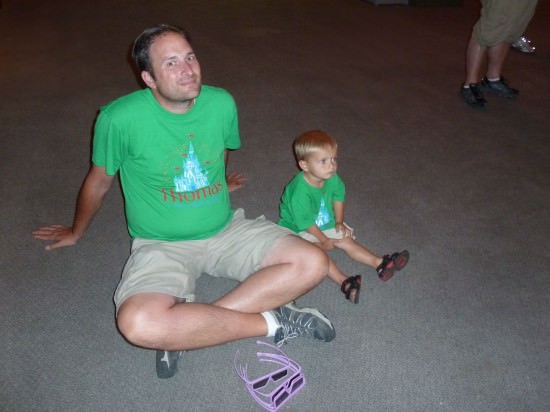 Our rave reviews convinced the rest of my family to see the Aladdin show so we all met up for that: 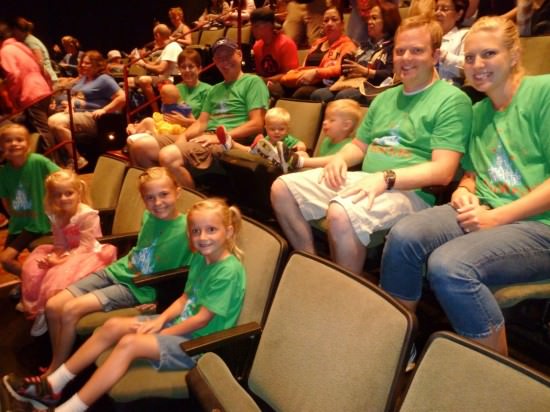 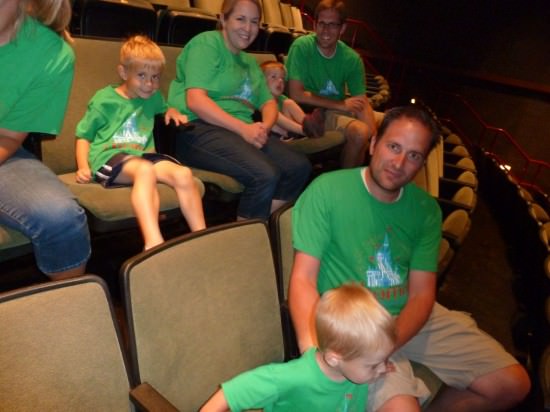 Just as enjoyable the second time around (even if this viewing included a wiggly baby behind me kicking my chair, raking his fingers through my hair, and playing peek-a-boo).

Dallas noticed there was a place where we could learn to draw Disney characters.  I wasn’t too interested in this, but then he mentioned that he thought Brooke would really enjoy it.  Duh.  Of course she would!  They taught us how to draw Jack Skellington.  Brooke was so careful to listen to the instructions and do just what the teacher said to do. 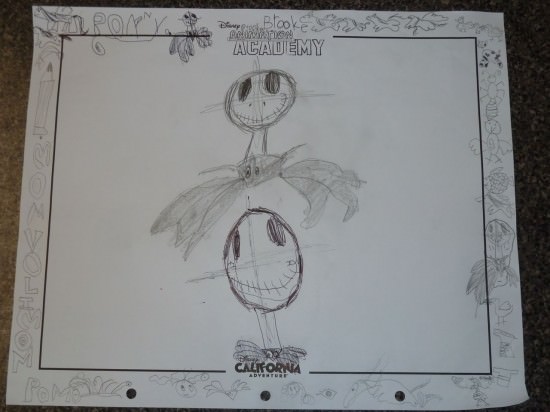 The top picture of Jack is what she drew during the class.  The bottom picture is what she did the second we got back to Belle’s Castle that evening.  She spent a lot of time drawing more pictures all around the border of her paper.  I wish we had gone to more of those classes because Brooke really did like it.

Caroline was nervous to draw her picture and kept telling me over and over again before it started that I would need to help her.  She also did a great job listening and following directions and this is the Jack Skellington she drew all by herself.  I think it’s cute: 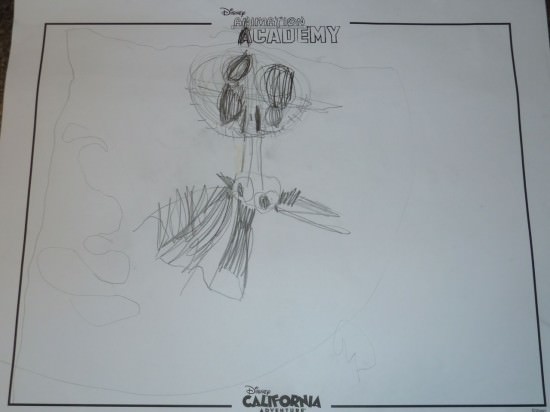 Spencer wasn’t so great at following directions (obviously lacking the listening and fine motor skills necessary for such a task), but he was still happy drawing on a paper with Dallas.  His picture is on the left and Dallas’s is on the right (in case you couldn’t tell): 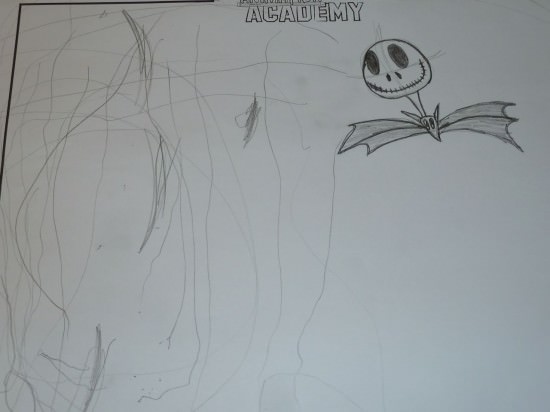 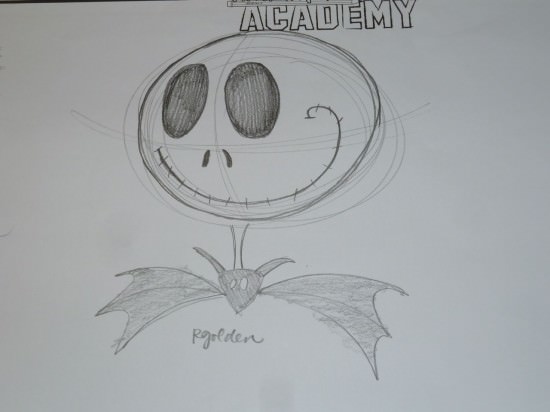 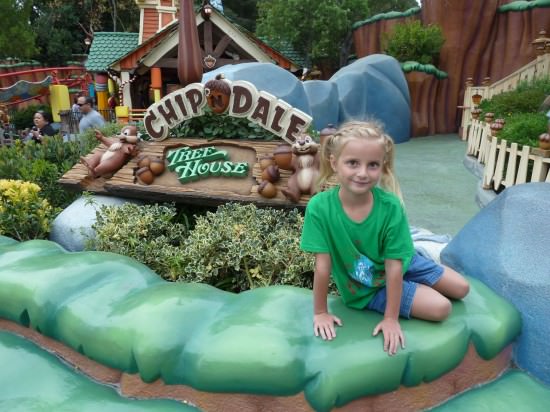 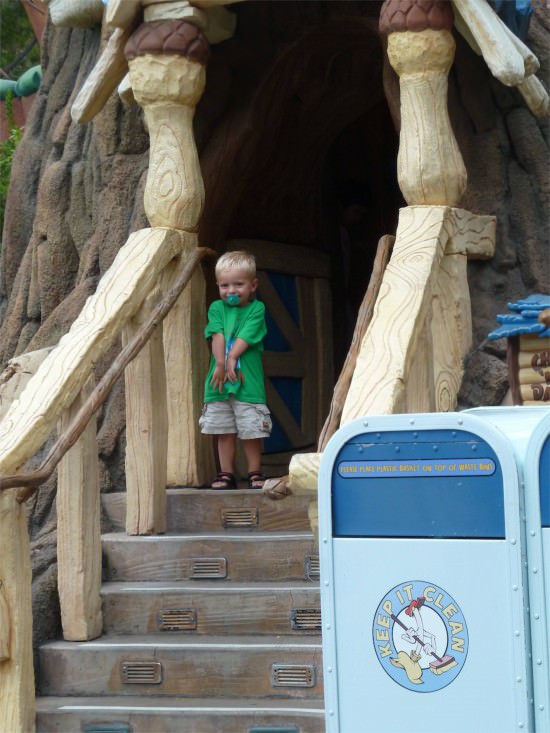 Finally, the show we had all been waiting for…Mickey and the Magical Map!  We tried to see this show several times earlier, but our plans were always foiled.  Since it was our last day, we made it a point to see it.  I thought it was kind of a dorky show and my brother thought the moral of the story was to disobey so it really wasn’t worth our great efforts to see it.  We did get a cute picture out of it, though: 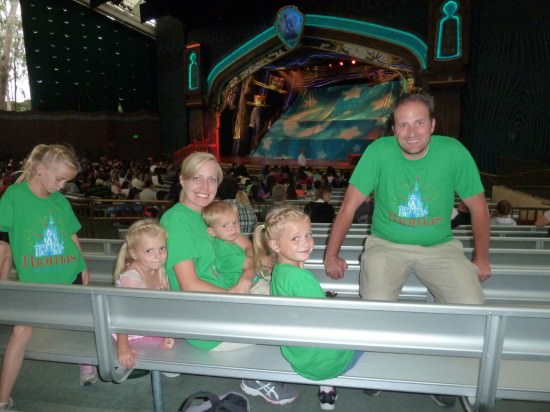 Brooke and Caroline gathered up the streamers after the show was over and took very good care of their little souvenirs: 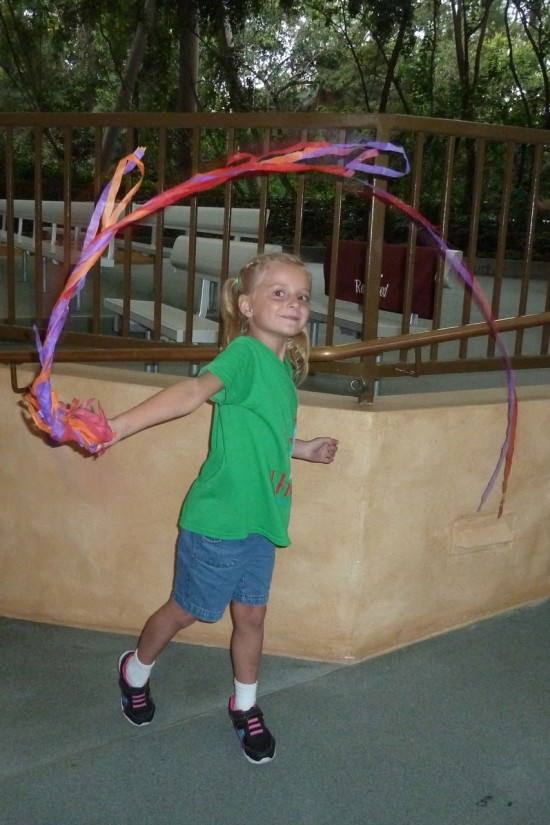 It was Friday so the parks were open later than they had been the rest of the week.  Since it was our last day we decided to stay as late as the kids’ behavior allowed.  On our other Disney days, the parks closed at 8:00 which I actually loved because we were able to get home at a somewhat decent hour and put the kids to bed before they really got delirious from lack of sleep.

What we didn’t realize was that on Friday Disneyland actually gets MORE crowded as the day goes on.  By 8:30 the lines were so much longer than they had been all week and our kids were starting to go crazy so we were happy to call it a day and head home on the monorail: 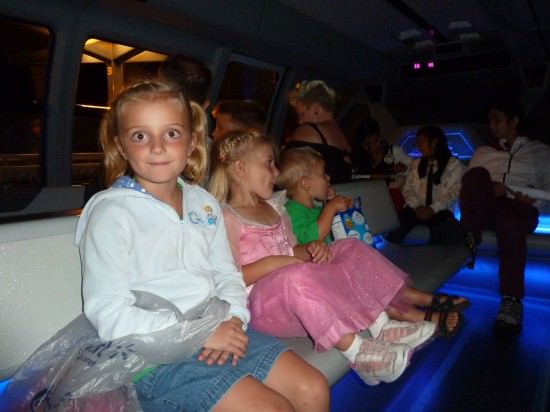 The next morning, Spencer had to get in his last moments of playing with the cars before we left: 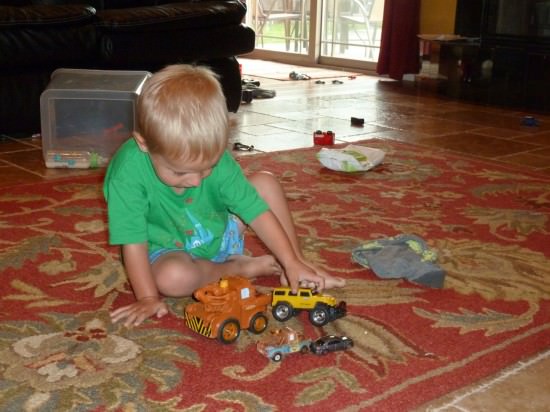 We said our good-byes: 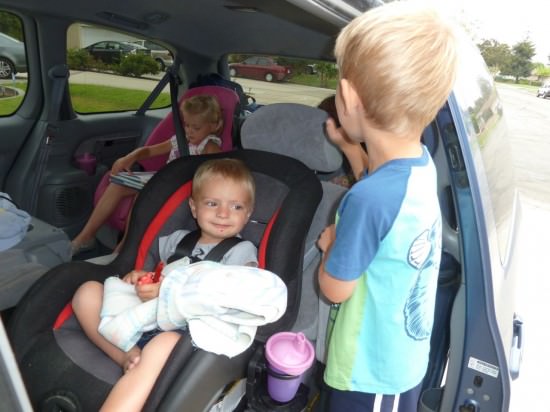 And then Dallas and I cried because we didn’t want this vacation to ever end: 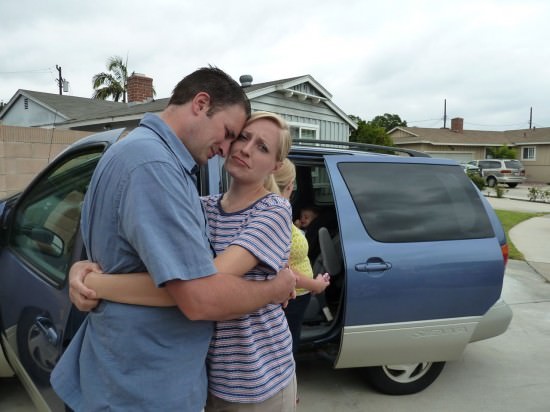 Here we are driving home.  Coincidentally my sister and I realized we were within one mile of each other the whole way home from Beaver to Salt Lake: 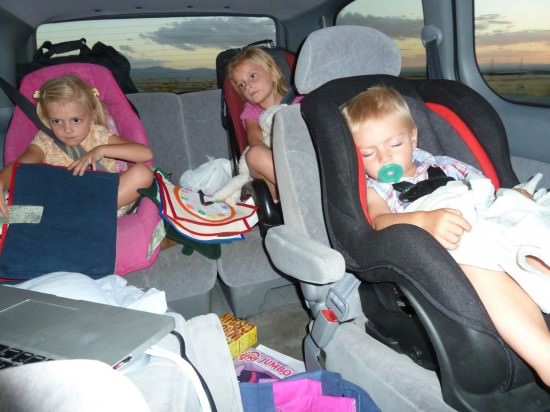 Have I sufficiently conveyed how much fun we had on our trip?  It was so fun.  Dallas and I just couldn’t stop talking about how much fun we were having.  When we were driving home we were remarking that we couldn’t think of a single thing that would have made the trip better.  It was just that perfect.  Our kids were so well-behaved.  The house we stayed at was so nice.  My whole family was there.  We had matching shirts.  There were cheese balls.  The things we did each day were so enjoyable.  We loved every second of our trip.  It was just so fun.  Take my word for it.

And if you don’t believe me, well, I have about seven blog posts you can reread proving my point.