Once again I’ve been saving up pictures and not posting them.  We’ll start with our visit to the fire station.

The girls immediately wanted to get their faces painted.  Caroline asked for a butterfly and Brooke wanted a pony riding on a fire truck.  I felt bad for the poor high school volunteer tasked with painting that on her face: 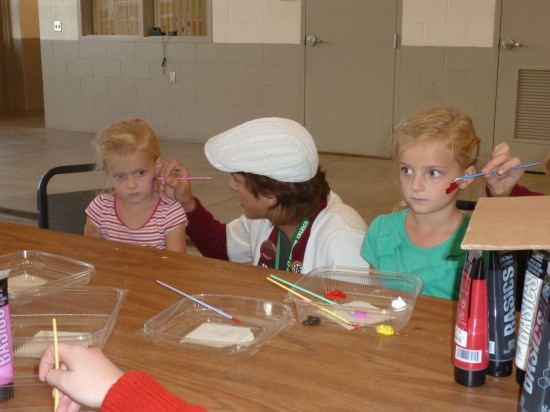 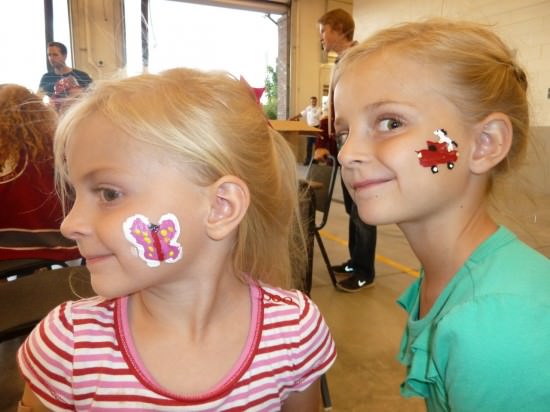 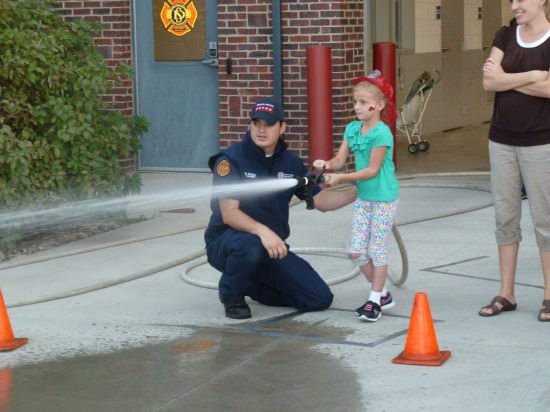 Brooke was careful to put her best cheek forward when posing for pictures: 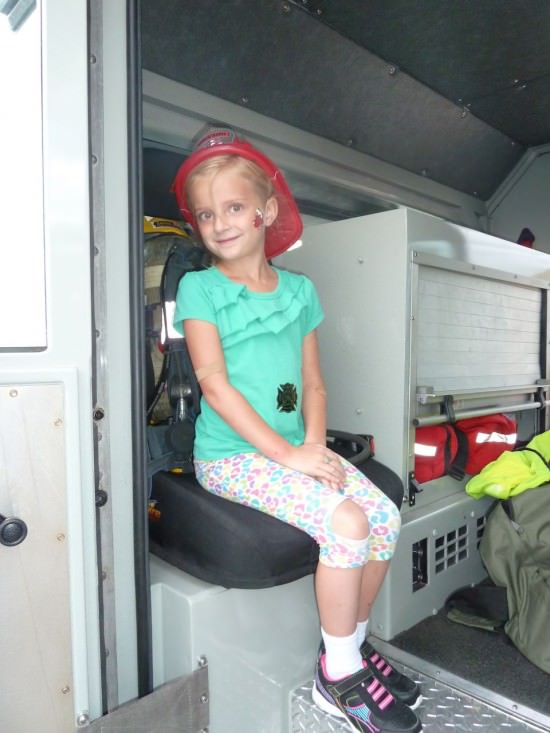 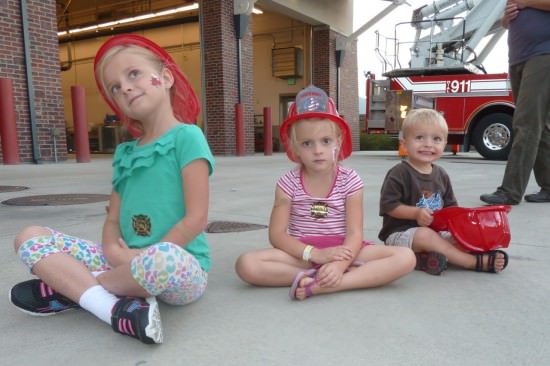 I really don’t know if I’ve ever seen Spencer as happy as he was walking among the fire trucks.  He had a perma-grin the whole time: 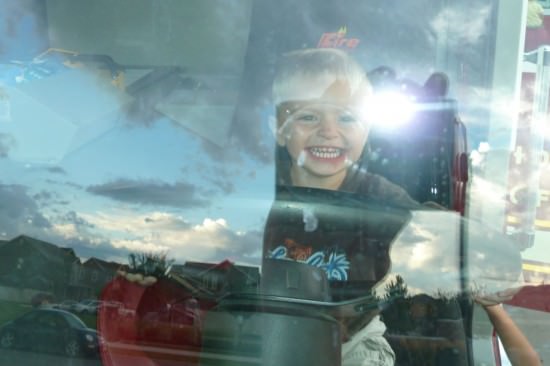 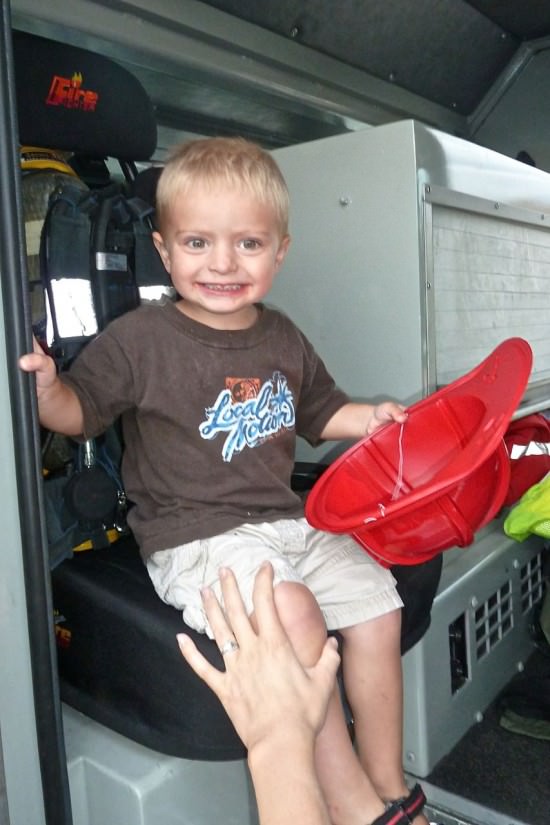 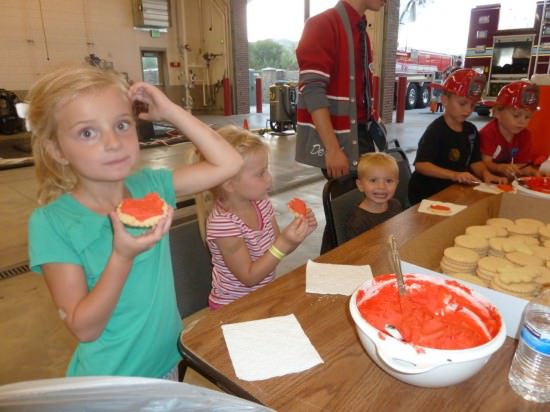 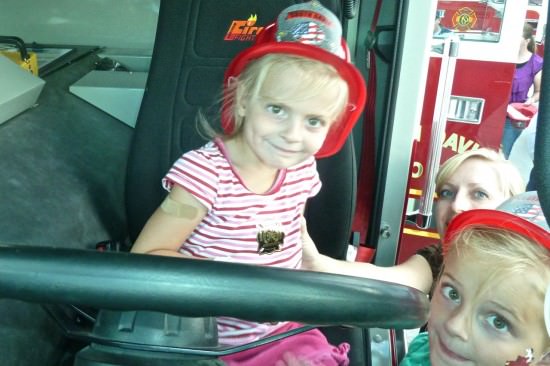 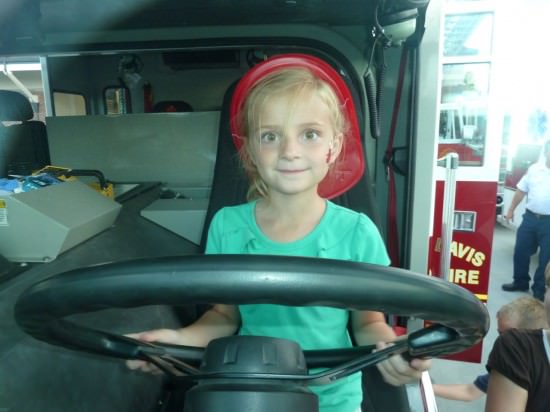 I love when the kids play creatively, even though it usually involves a huge mess.  Here are all the ponies at the Grand Galloping Gala:

One morning the weather was so pleasant it just beckoned the kids outside to read:

Brooke was pretty proud of this get-up:

Here the ponies are sitting at their desks in school:

Had to get a close-up of the pony at her computer:

One day I glanced out our back window and thought I saw a person on our deck.  I crept over for a better look.  The person was gone, but to my surprise, his tent was still there.  My thoughts started racing:  What in the world?!  We’ve got a squatter who’s taken up residence in our backyard?!  How long has this been going on?

Unsure how to handle this unexpected situation, I just watched the tent for a little bit.  It was a really windy day and before long the tent was airborne, flying into our neighbor’s yard. I then remembered that I had seen their tent set up the day before, so it must have just taken flight during the windstorm.  Phew.

We had a family dinner up at my aunt’s house.  They had chickens and my kids thought that was the greatest thing ever.  They loved running around on the grass, feeding and chasing the chickens:

I love Carson’s face in this picture:

Caroline and Spencer were telling each other secrets at lunch.  It was pretty much the cutest thing ever:

Especially when they got caught:

One day we were running a little late and I was trying to herd the kids to the car so we could get Brooke to school on time.  I heard a panicked, “Oh!  It’s show-and-tell today!”  I told Brooke to run and grab something as quickly as she could.  She chose her horse.  Dressed up in a skirt.  With a flower around its neck.  Sporting fairy wings.  It was quite the sight:

I love it when Spencer plays with little people and animals.  Here he put all the ponies in a circle:

Brooke and Caroline went to a birthday party.  (Almost) everyone got their faces painted.  Brooke chose to have her arm painted instead “so I could watch what they were doing and so it didn’t get in my eyes.”

One day Spencer sat like this at the counter and the girls thought it was hilarious that he looked like he was only a head:

Caroline has really taken to watching out for Spencer lately.  Here she is reading to him.  Also, I was being stingy with band-aids and wouldn’t let the kids have any unless they were actually bleeding, so Caroline found stickers and placed them on every one of Spencer’s leg scratches:

Brooke loves to put her toys in shoes as if the shoes are cars or boats:

She also loves to arrange all her toys just so.  Here everyone is looking at the little dog, Charlie, who got an award for something:

What was on the back of one of Brooke’s school papers?  This:

When asked what she drew she said, “There’s some pants and the underwear is above it.”  I’m still unclear as to why she felt the need to draw underwear on her paper, but I’ve come to the conclusion that the way Brooke’s mind works will likely always remain a mystery to me.

Since she had a birthday, Brooke got to be Star of the Week.  She helped me decorate her poster.  I left for a minute and when I came back I saw Brooke had drawn an interesting pony.  Upon closer inspection I saw she had made the pony out of the letters of her name.  I was speechless:

That Brooke.  She just keeps things lively around here.

I always wait to do my potpourri posts until I have collected enough pictures to create a substantial post.  Then I wait some more and end up having so many pictures I have to split my post into two lest your eyeballs be assaulted with too much Golden goodness in one day.  Here’s part one!

Brooke loves strawberries and she (and I) really love chocolate-covered strawberries so I made her (and me) some for her birthday:

Her teacher was beyond inspired to get her a pony…and not just any pony – the one pony that Brooke was dying to get:

Brooke has been determined to catch a butterfly. One day she did – with her bare hands.

The splash pad is open!

We love the splash pad!

Until the water shuts of and we’re left freezing:

Have I told you he sort of has buck teeth?

On Sundays when we don’t have anywhere to go we often get into our pjs, watch a movie as a family, eat M&Ms and try to ignore Spencer’s toe that is forever poking out of a hole in his sock:

Dallas’s dad gave Spencer Lincoln logs for his birthday.  The kids had fun building with them:

Spencer does this really annoying thing where he eats pancakes and then uses any leftover syrup on his plate as lotion, rubbing it all over his hands, face, and hair:

Caroline and Spencer thought a diaper box was the perfect place to eat their lunch one day:

It’s already been mentioned around these parts, but Dallas and I went on a date!  We went to a concert at Temple Square and then walked around City Creek.  It was glorious!

I’m back for another rousing round of potpourri.

Here we have Spencer playing with a princess castle:

Here we have a grumpy Caroline who didn’t want to go to bed:

Spencer thinks this rug is his parking lot.  Could there be a worse place for lawn mowers and strollers to constantly be than right in front of the kitchen sink and oven?  The answer is no.

The preciousness of a sleeping baby:

The silliness of a girl with a pot on her head:

Brooke being creative on her school paper yet again:

We visited Temple Square with some friends:

We had a lovely Thanksgiving with Dallas’s family:

I had to smile a few days later when the snow melted and I saw the remains of the snowmen they built:

I also had to smile at this:

That’s our backyard!  It almost looks like it has grass!  We got some rain for several days and then the snow, and when the snow melted our yard was green.  It gives me hope that next year we may actually be able to grow grass.  Hallelujah!

(Just a reminder of what the yard looked like before:)

The girls posed with their bears:

And of course Brooke insisted that I take a picture of my fourth child:

Dallas was on set at the LDS Motion Picture Studio as they were filming the Joseph Smith movie:

Dallas painted our closet door in our first apartment.  I was a little upset by this considering we didn’t own the place, and I was pretty sure our landlords didn’t want a depiction of the sky, a house, the ground, and China on their door forever but Dallas assured me it would come right off.  It did:

For my birthday Dallas and I went to the temple.  When we got there, Dallas realized he had “forgotten” his recommend.  We had to go all the way back home.  When we entered our apartment I knew something wasn’t right.  It was the weirdest feeling.  I could see little things were out of place.  I went into the kitchen.  Our friends and family popped out and yelled, “Surprise!”  Dallas had given me a surprise party.  So sweet…but still such a weird feeling to walk inside your house knowing it’s not how you left it.

I was turning 24.  Dallas had to get creative with the candles:

One night there was a huge windstorm.  Afterwards Dallas and I were in our apartment and the lights started doing strange things.  They’d get brighter and dimmer every few seconds.  We couldn’t figure out what was going on.  It was a Sunday so we decided first thing Monday morning we’d call the power company.

We didn’t last that long.

As we were walking home from church was saw smoke.  As we walked closer we realized it was coming from the general direction of our apartment.  As we turned onto our street we saw firefighters and trucks dousing our backyard.

Apparently the windstorm had knocked a tree onto some power lines.  One of them broke and was swinging freely.  Every time it hit another power line it would create a huge fireball that fell to the ground.  That’s why our lights were pulsing brighter.  One such fireball ignited the backyard and burned it all up, including the neighbor’s trampoline.  Luckily that was the only casualty and nothing else was damaged and no one was hurt.

For Halloween Dallas was his usual creative/obscure self and went as The Son of Man painting.  Call me and my family uncultured because we weren’t familiar with this piece of art but now that I know what it is, I love the costume.  I was still teaching first grade and decided to go as Ms. Frizzle from the Magic School Bus books/movies:

Dallas’s mom was in charge of Provo’s Children’s Celebration of the Arts – a day where kids could go to the park and do all sorts of art projects.  It was such a fun activity.  Dallas and I enjoyed helping out:

Jacob’s family came for Thanksgiving.  Here he is with Emma:

My family all went to Las Vegas to see BYU play in some bowl game out there.